Our site logs show that a number of events receive substantially higher levels of hits (visits) than many events. Two of the most popular events appear to be the ISDT 1964 held in East Germany in which the legendary Steve McQueen competed in the American team on Triumphs. The other event being the ISDT 1939 which took place in the closing days of the shaky inter-war peace time and took place in what had been Austria until the Germans under the leadership of Adolf Hitler had annexed what had been his own homeland. The event ended with the British teams being evacuated to escape back to England by a variety of means including British Service teams who the Germans had pledged safe passage to return to a port from which they could reach England.

The event sat over a disputed corner of Europe. In the opening prelude to the War the Third Reich had already walked in, unchallenged, into Czechoslovakia to annex the Sudetenland an area subject to cultural changes since medieval times and increased German nationalism led the German Reich to consider it was taking back its own. Day 1 entered this disputed territory and most days the event took place either side of the Austrian German border. We have recently started mapping the course of the event which can be found on the blog ‘Mapping the 1939 ISDT‘

Our Euro reporter ‘STB’ acquired a rare copy of the Motorrad magazine article and report on the ISDT from 1939 and it is indeed quite amazing considering the amount of damage of the war this copy survived and I am grateful for another forum reader from German reader Andreas Holthaus who we are most indebted for translating the article for our use in this site. It is therefore a great pleasure for me to finally re-publish after nearly 75 years the German side of the story of the ISDT 1939 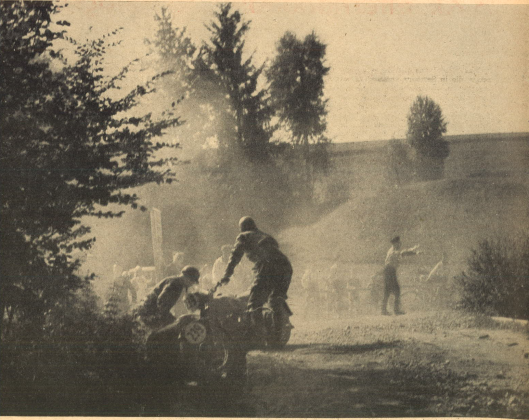 Photo – Dusty fume and stony boulder give a clear image of the arduousness of this six days trial. The moves of the people reflect the stress, which the riders have all day long.
The two with #239 led by F Weber BMW 593 from the Kraftfahrtschule der Luftwaffe [Air Force motoring school], in the foreground of the picture, have won some time [in advance of the schedule], which they now use for some smaller work. ISDT 1939 (das Motorrad)

With about 475 kilometres to acclimatise riders seemed to be to be quite much. In exchange, the riders had to face only little off-road, with the course mainly on surfaced roads. However, it should not be forgotten, that the Ostmark[1] roads are not of a Autobahn nature yet. There are some big main roads with formidable tar paving, and with bends! So, boys, one would really like to be born here, only to ride these bends every day and all day long. This is such a riding pleasure, that you always have to slow down yourself in order to be able to see the landscape, too. By the way, I do not advise anyone to watch the landscape in slowly rolling mode, if not just riding a mofa[2] or a 100 cc, but to ride shorter distances in a sportive way and then to stop [for watching]. On these narrow roads and with the heavy traffic these roads have to bear, you can’t look about, and watch the traffic around carefully at the same time. There are a lot of large buses around here, and they are quite wide. If you are not at the very edge of the road, the experience will often include the smell of burning rubber.

The first days stage had the official name “Sudetenlandstrecke”[3] It ran from Salzburg over Passau up to close to Krumau, where the lunchtime checkpoint had been established at the “Pötschmühle”[4]Here, at the outermost part of the leg, was a hefty off road section, which could also be seen by the fact, that this was the slowest section of the day with only 33 km/h. In return, the owners of the paper mill did dish up an excellent lunch to the riders. In the large auditorium, the tables were festively decorated, and the riders welcomed it. The way back over Linz at the Danube then again brought some narrow forest tracks, mud and stone. But, in total, it had not been too bad.

The biggest experience of the first day had been, that loose gravel doesn’t have the same frictional coefficient as a nice rough asphaltic surface, and a lot of people already had gone to the ground.

As always, this six days trial generated a new “technical term”. It came from the “great creator of new terms”, our national rider Otto Sensburg, who always is creating gorgeous new terms at such opportunities, against him Chrius[5]From then on, the riders said, when they had gone into hedges or onto the ground: “da hat’s mi überlisted” [there it did outwit me].  And that is a pretty figurative saying. That day it did outwit many riders, this always happens at the beginning of a six days trial, as one didn’t find ones speed, yet. Here at the Ostmark, with its dust and gravel and the never ending bends, it’s something special. 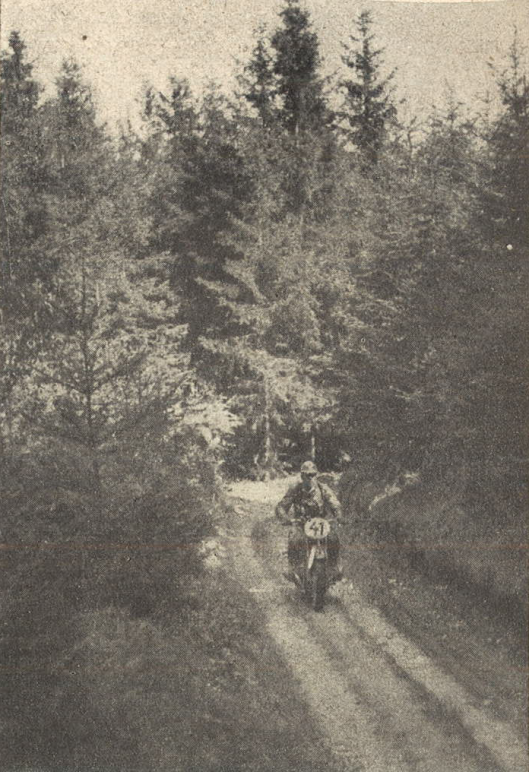 Photo – That was the typical terrain at the first day, narrow forrest tracks, interrupted by short boulder sections and large bathtubs with mud. Rider is #41 NSKK-Obersturmführer [comparable to 1. Lieutenant] Meinl of the Motorgruppe Ostmark on BMW R 51.ISDT 1939 [Ostmark was the name for former Austria, after Germany annexed this country] (das Motorrad)

The disease of punctures started right from the first day on. Pohl from Werningerode had three of them, and he was not able to regain the lost time completely within the allowed time. It was a nasty misfortune to loose the gold medal right at the first day due to this one point, especially as this remained the only one. For Pohl it had been a small tack the first time, the second time a real carpenters nail. Riders always help each other. As one rider already had no inner tube left, he got one from a comrade. The other one was in a hurry, so, with the buckle of his belt he ripped a tear into the spare tube, when taking the tube from his belt, of course without noticing this mishap, and then he rode away. The poor rider stood there with a spare tube with a tear, but quickly he had hoisted it as a “distress flag” and did wave to a Wehrmacht outfit with the tube. The passenger of the outfit did get it at once, and threw a spare tube to him, without stopping. Of course I don’t know anymore, to whom this happened, and who the rider of the army outfit was, this might be seen as outside assistance!

As a lesson for those who ride such events: The belt is not the correct place for spare tubes, they should be carried in separate bags. By the way, Otto Sensburg also had a puncture the first day. During the previous six days trial, after the third puncture he had put the “evildoer” into the pocket [as a talisman] , and from that moment on he had no further punctures during that event. So, this time he already put the first one into his pocket, if it did work out this time, I can’t tell.

There were a lot of defects already on the first day, and a number of retirements, too. The English private riders lost a whole clutch of men, but also the Italians and we did lose some riders. Anyhow, the affected English riders were more or less unknown people, who may not have been aware what a six days trial in Germany’s mountains stands for.

Within the retired Germans was Hubertus Klett from Berlin, and the normally very good riding Herrmann on his small DKW 125 cc. Unfortunately, we do not always get information about the reasons for retiring. On Herrmann’s motorcycle, for example, the cylinder head had been distorted during assembly, so that it blew out.

Another promising competitor, Eisner from the DDAC[6] had been unlucky, as a wire from the condenser had come loose. He pushed his bike six kilometers to a workshop, where, with adequate devices, the problem could be found and fixed. Anyhow, this brought fifty seven points on his account. For the rest, Eisner did attract attention several times, as he has been fantastically fast with his 125 cc from the Auto Union[7]. Anyhow there is the rumor, that he already had outpaced a man like Mundhenke in the Ostpreussen- Fahrt[8] in the offroad sections.

Another unfortunate loss for us was the retirement of Döbereiner from the DDAC on a BMW outfit. At a parking space, he had to do a repair, and for that he had taken a drilling machine from a service car. The technical commissars interpreted this as outside assistance, so the DDAC team withdrew the rider. In contradiction to the opinion of the German sports commissar, the English didn’t agree, that the act of providing a drilling machine was outside assistance. But, the German organisers wanted to show their opinion was right in the beginning and avoid a long debate. After all, this shows clearly the need to check and discuss the regulations in this case, as well as in the case of the absurd interpretation concerning the absolute time for the vase teams.

Fifteen total losses on the first day. Six of them were from England. Between the retired riders unfortunately also was the excellently riding Hauptmann[9]  Jakobi from the Luftwaffe[10], who did break a cylinder off during a minor fall, it had only been a slide. If you are unlucky, it may happen this way, normally one can drop the BMW onto the side even with high speed, without anything happening.

3 thoughts on “ISDT 1939: Day One report as published in ‘Das Motorrad’ magazine”