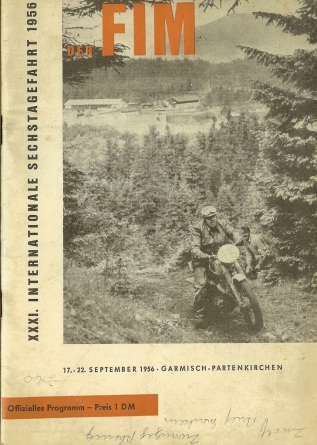 A copy of this programme has kindly been provided and can be found on our issue.com site and is featured in this site blog with an embedded copy for easy reference..

Photo of the Skistadion readying for the event. ISDT 1956

Photo of Harro Esmarch in Glasses

This year is to come from “STB”, plus an eminent Journalist, who was always required as Racing Services Manager for Castrol 1964 to 67 inc., covering GDR, USSR & Polish manufacturers Teams, here that very chap with glasses Mr. Harro Esmarch (2013-Sadly news has recently reached us that Harro has now passed on and will be sadly missed by all who knew him) who is kindly allowing us to browse thru his wonderful collection, he missed 1964 over the little matter of a “cold war”.  [I shall slowly assemble this year.]

We now have found a worthwhile collection of images of this event at the web site of the Technisches Museum Wien who have gathered a collection of ISDT records and images, mostly of Austrian competitors and team, from the best resources available – professional motorsports photographers.

View the gallery of images for ISDT 1956 here

Photo of superb view of a sturdy Sidecar outfit. ISDT 1956 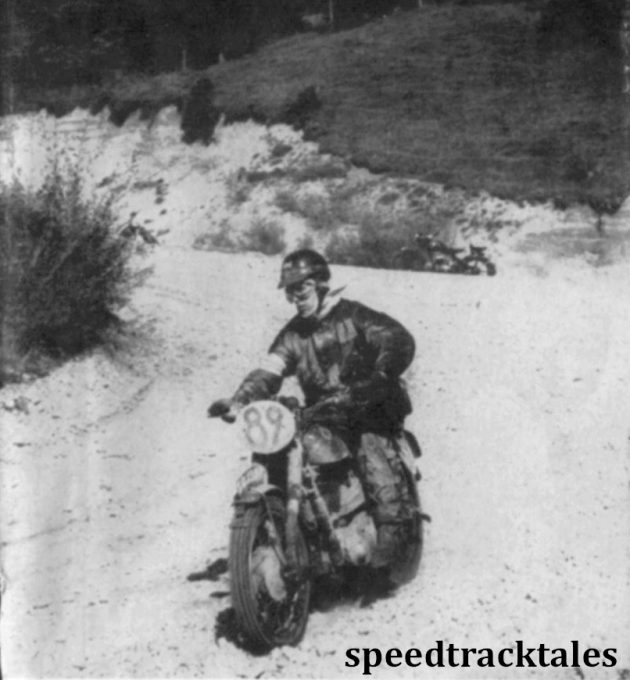 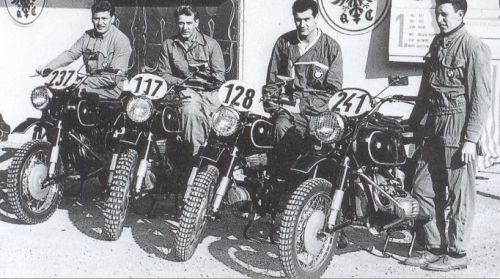 Tim Gibbes reflects on his own involvement in the 1956 ISDT as an Australian who had relocated to Europe. He first rode the Scottish 6 Days Observed trial won first class award on a 350 Matchless purchased from the factory for 95 pounds. Later added to with a 50 pound 500cc scrambles bike. AMC Team Manager Hugh Viney saw his potential for speed work so loaned a 350 Matchless for the Welsh 3 Day Trial a little later, where he won the 350cc Class. This led to AMC giving him an AJS factory ride in the 1956 ISDT at Garmisch Partenkirchen in Southern Germany. Won a gold medal, the first of 6, plus one bronze & one DNF. 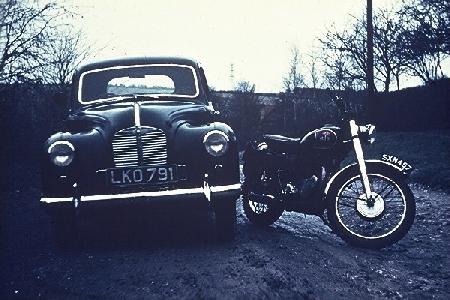 The 500cc works AJS used for the 1956 ISDT, with his only other possessionat the time, a 1949 Austin A40 pick-up, which also served as sleeping quarters when it was too wet to sleep out under the stars, a workshop, cookhouse & secretarial office!

Dave Martin again found this Museum pic below , Dave reckons  that Schnapps can do that to people!.

Photo of rider leavering motorcycle out of the mud ISDT 1956

Looks like an AJS or Matchless to me, anyone out there with info please?

Photo of #220 Backzkowski off to Silver on 600cc Zundapp

Photo of on the right Hans Stuck in discussion ISDT 1956

Is this the Gehring we think it is on Germany Team’s 250 Zundapp at Wasserdurch fahrt Loisach on his way to Gold. from 19.9.56 here on.

Photo of sidecar outfit speeds by on woodland track ISDT 1956

#149  MY old Centre Racing number, this is not me. Thanks to his Son Steve for helping identify this photo.

Photo of Same date as above at Bei Wallegau ISDT 1956