Here we go! & look at the Welsh TT ad. bottom right on the front page.

As ever thanks to ‘STB’ for identifying the above riders. 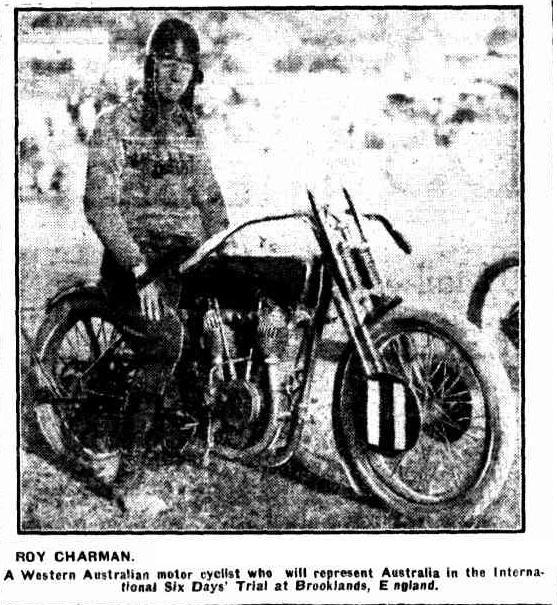 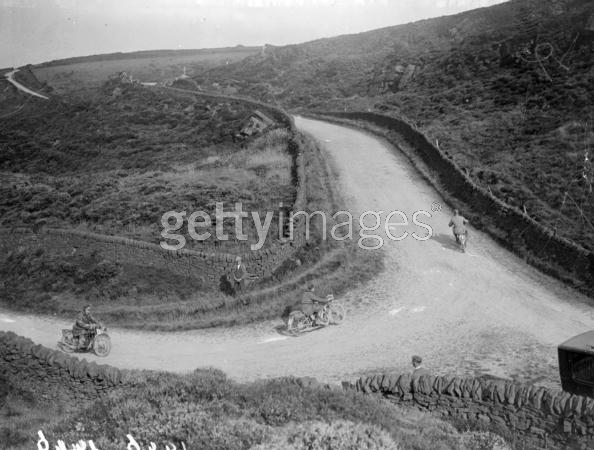 The following image was found on the excellent http://www.austinharris.co.uk website which is a man’s dedication to maintaining the history of historic motorsports using the amazing photo archive at Haymarket. Original prints of these images can be obtained from that site by following this link.

Photo #113 Goodall and Whittard and their Morgan ISDT 1926

A well observed climb!! for more information on the severity of this climb check the news cuttings we have unearthed reporting on the progress of the event.

Here is one pic rescued by Dave Martin, does anyone out there have where or who info please! 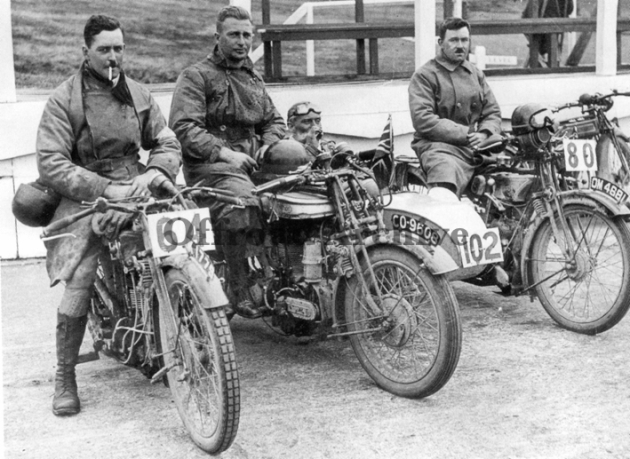 What the Papers Said !

We have been able to gather the following news paper reports on the event.

English files arrived by last mail and contain interesting particulars of the famous event which was held on August 16th. to 21st. over an 800 miles ‘Road’ course, terminating with a speed trial of approximately 50 miles on the Brooklands track.
The mere mention of the distance covered, however, does not convey any impression of the severity of the conditions encountered, the course selorted. including atrocious road surfaces, water splashes and loose stones.
On Blacker Mill Hill for instance, which competitors had to descend on the first day and ascend on the second day — very few of the riders managed the descent without falling off or losing control of their machines, so steep was the declivity. Again, only 25 per cent of the entrants climbed this hill the following day, the remainder falling half way up.
This year’s international trial attracted 113 / competitors, of many nationalities, and of these only 91 completed the course.
The three teams of B.S.A. riders consisting of a ladies team, the gents’ B team and a team of Dutch riders all scored notable successes ; the B team being the only team in the trial to finish without loss of points. The ladies’ team secured a team’s prize trophy, and the Dutch team finished second for the international silver vase In addition to these awards the 12 B.S.A, entrants secured ten gold and one silver medals.
It is generally conceded by English motoring journals that this international trial is the most important, and incidentally the most severe reliability trial held in England.”

Image – scanned article in ‘Sunday Times‘ Perth, Western Australia on the success of BSA at ISDT 1926 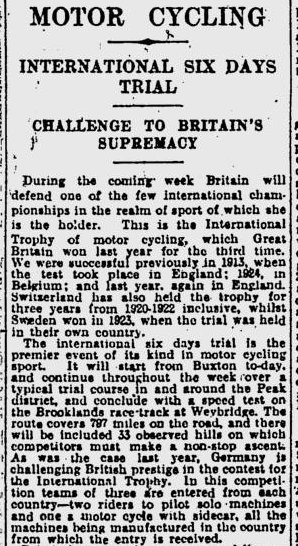 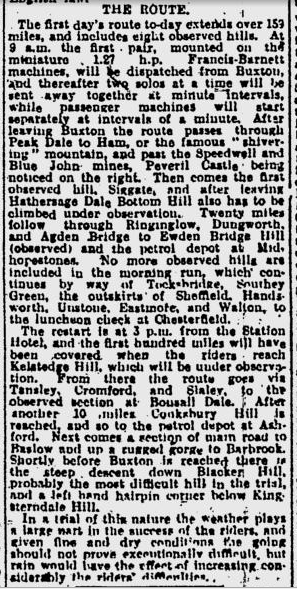 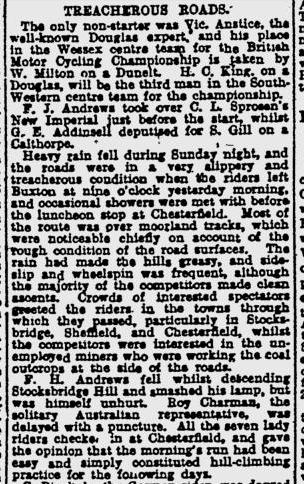 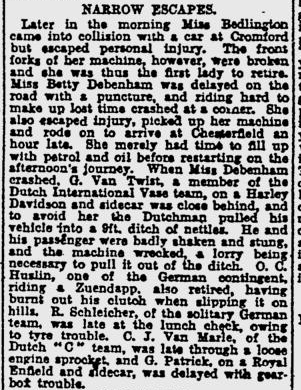 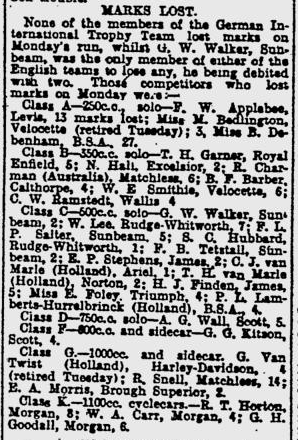 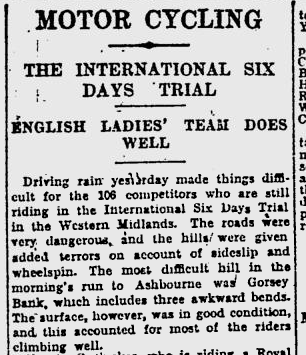 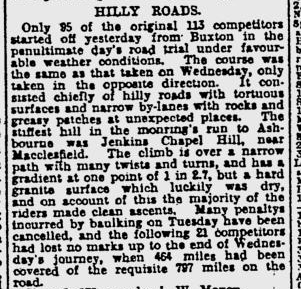 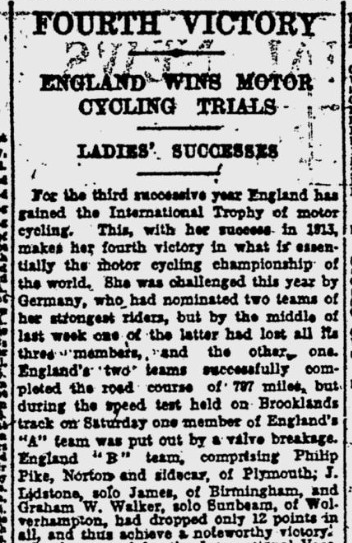 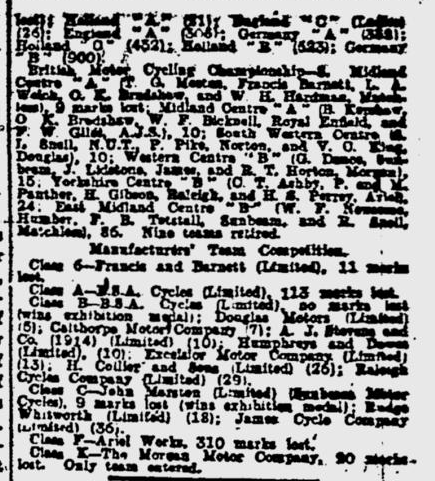 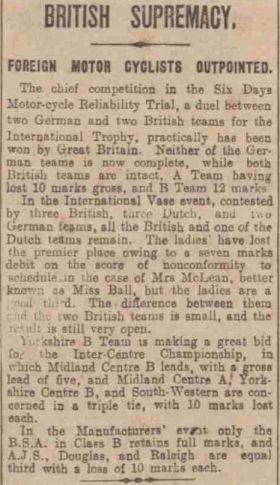 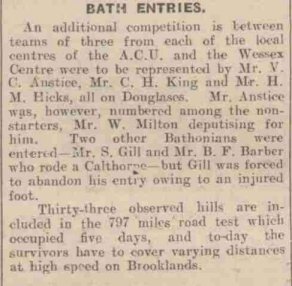 In 2011 Phil Pike’s restored Trophy winning Sidecar outfit appeared at a Bonham auction. Details about the bike including some history of it’s involvement in the ISDT in 1926 and later is included in this page