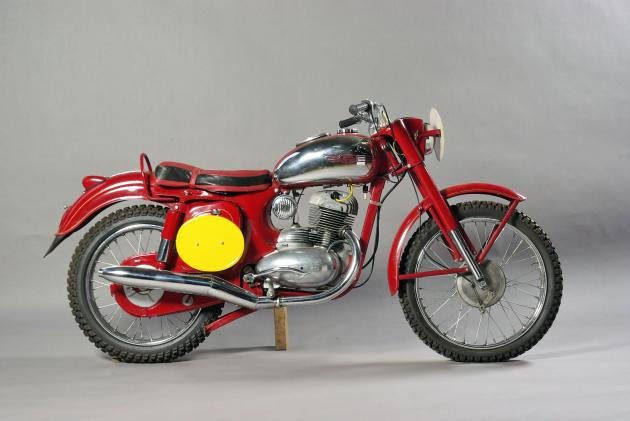 We found details of this ex ISDT Jawa from the Bonhams web site where the bike had been sold at auction in 2008. The bike originated from Czechoslovakia and found its way to Austria to be a working exhibit of a collection. Below we have reproduced the text from the catalogue.

Czechoslovakia’s National Arms Factory diversified into motorcycle manufacture in 1929 when company founder Frantisek Janacek obtained the rights to a design from the German Wanderer factory, combining the first two letters of each of the names to create the ‘Jawa’ marque. Jawa’s operations were combined with those of erstwhile rivals CZ in 1949, and throughout the succeeding two decades the marque’s main claim to fame was an outstanding run of success in the ISDT and in international moto-cross. Using a mixture of Jawa and CZ machines, Czechoslovakia first won the International Six Days Trial in 1947 and would go on to take a further six titles up to 1962. From then onwards East Germany exerted an iron grip on the competition before Czechoslovakia emphatically reasserted its domination in the 1970s, claiming victory on no fewer than seven occasions between 1970 and 1978. The Type 553 ISDT model offered here dates from 1961, in which year the competition was held at Llandrindod Wells in Wales, and although Czechoslovakia did not win the main Trophy award that year its team did come away with the Vase. The machine has the aluminium-alloy cylinder barrel usually reserved for expert riders and was brought to Austria by a Czech emigrant, who sold it to Professor Ehn in 1987. Since then the Jawa has been used regularly for ‘oldtimer’ meetings, the last such occasion being in 2005 and in between times has been on display in the Museum. The machine is offered with original Czech registration papers.
Sold for £2,760 inc. premium