The FIM’s 40th International Six Days Trial took place over the week of the 20th to 25th of September 1965 and took place in one of the worlds greatest meccas for Motorcycle sport the Isle of Man, part of the United Kingdom. 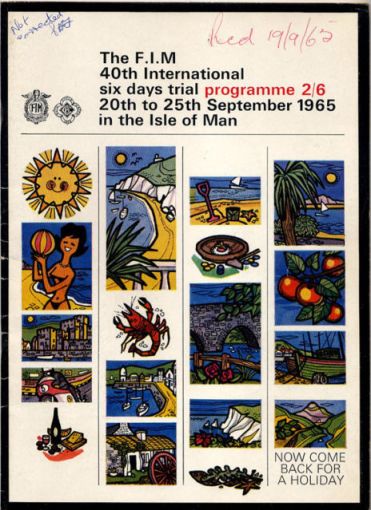 Image – cover of official event programme of the 40th ISDT 1965

Arthur Williams found some bits for this page so, here we go!, ISDT? rumbles came from Manufacturers, Eastern Bloc galloped ahead in reliability plus marketing plus HARD effort, here goes 49cc Hercules Rider N Gobler on the way to a Gold.

Photo At Glen Maye even on the 5th Day a  Russian rider’s mealtime, with effort from team & rider. ISDT 1965

Photo of Triss Sharp on the Greeves Challenger, ISDT 1965

All seems well until you gather how little support these skilled lads had, a warm drink, dry clothing, spares etc were lacking when competitors were supported grandly, Triss was wrongly maligned, after a brief Husqvarna spell Triss left the non helpers at the end of season, disappointment to all.

Photo of Brian Martin of BSA watches Alan Lampkin  with another BSA as expected needing fettling! at Cornaa on 2nd Day. ISDT 1965.

Check out our feature on Arthur Lampkin’s 500 TriBSA

Photo of Trophy rider #150 Triss Sharp, 246 Greeves was described to be controversial! ISDT 1965

TRISS WAS A DETERMINED CHAP UNAFRAID TO VOICE HIS OPINION, WHEN NEEDING TRADE SUPPORT HE MORE THAN DESERVED.   BRITISH OPPOSITION RECEIVED A TERRIFIC AMOUNT OF SUPPORT. ACU & Brit TRADE BARONS & MANUFACTURERS HOWEVER buried their heads in convenient sandhills whilst talented Riders on British machinery were simply not supported.

Reliability along with performance plus earlier market dominance was allowed to drift into the mists, Britain’s Motorcycle Industry directed by top level manufacturers was run by people who could have done better.  British Motorcycle Marketing could not even notice Honda & serious foreign engineering efforts, reliability plus performance advances, only challenged as usual by antique machinery, brave men plus Italian flair and design underlined how Britain was determined to lag behind.   ‘British always needed guidance, investment plus effort from the top, hardly ever present compared to the rest of the world. (My opinion plus that of Arthur Williams is to follow)

My old friend RTM ‘Big Roger’ Maughling actually took the risk of publishing info much known after Triss was in my opinion cruelly plus unjustifiably termed “the man who stayed in bed”.   RTM spoke out to suggest that the Industry Association was initially felt to be responsible for applying too much pressure.    Roger then clarified his account.   Selection Committees appointing Ken Heanes at the last minute only if certain machinery was to be used.   Actually the likes of Jack Stocker, Johnny Giles, Dick Mann, & Jim Alves would have conducted things far better had they been appointed to relate Ombudsman style with Allan Jefferies. (ie No Manufacturers representatives)   Triss plus his younger brother Bryan were riding for Greeves using 250’s but on the 5th Day in 1965 Triss decided to stay in bed, quickly Greeves then stopped support to them.   HOWEVER, Bryan had actually retired with concussion after a heavy Friday spill, Triss had lost the front mudguard & all goggles he could locate became eventually too caked for use and a long hard riding period into continually sprayed dust grit plus mud had Triss’s eyes too sore to continue especially with no mudguard on his front wheel at a stage when the Team members had only 2 left, both well out of the contest.    Promised support for British Teams was not even in existance & seeing East German Entrants with 40 or so support people cleaning or providing fresh goggles, spares ,food, tools etc. to support their Teamsters.   Friday arrived, spirited British efforts came to an end, virtually no support for the British Teams even on British soil had been received!, a few sweets etc from spectators was all Bryan Triss & Co had been able to partake of, no Lunch Checks, , snacks or much needed liquids, breaks etc.  & things reached a head when a spectator trying to supply Bryan Sharp with just a cup of tea was rudely told to “***** off” by a British Team Official.    Auto Cycle Union (ACU) had selected people plus machinery, where now were those Team Managers & officials when the chips were down? few know & those who did seemed not to care, expectedly unreliable BSA machinery had all packed up, as expected & privateers plus Teamsters found a chaotic spares situation using cannibalized bits from dead machinery along the course.  BSA Manager Brian Martin, with Greeves Manager Bill Brooker had their hands very full much due to their products too, however their jobs were perhaps dependant on their comments & attitude to media.   Somehow arranging spares, cups of tea, snacks & clean goggles would seem to have been beyond the organisations.   Personally Arthur Williams, the late Roger Maughling & myself are disgusted.  Triss & Bryan have our sincere sympathies for being neglected by a British System, much as an old Soldiers or Hero still is in UK.  We still see it & no wonder British motorcycle Market machinery is treated as ‘Vintage’ only.

Bill Faulkner, a well known one day Trials man brought the only BSA to the finish , albeit for a Bronze after those 343 & 441 Victor style Works machines all packed up, to Britain’s & BSA shame. Bill was quoted as stating that an ordinary bloke had no idea how tough it was.  Bill nursed his private unit B40 BSA home to the finish though. He used ignition system from a scrapped Tina Scooter, a Gold Star front wheel, a Gold star QD Rear wheel, a standard C15 camshaft & raised his Trials gear ratio & ran it on Castrol R30, cycle bits 3 years old Bill upped carb main jet from 240 to 280, advanced his ignition slightly, perhaps the factory could have noted.   I was riding a 500 Tribsa in Hawkestone Grandstand Scramble when Jeff Smith flew past me on the old long straight heading for the big hill, I think it was a 340 or similar & media people’s columns spoke of Magnesium bits etc & yet a big ex arms producing company could not get a machine to last through the ISDT.

Photo of Ray Sayer’s 350cc Triumph as it finished for Gold.

What the Papers said!

Photo the final act in a gruelling drama is staged in the vilest of weather. The survivors of the Trophy and Vase Teams set off on the Speed Test. They are turning out of the Glencrutchery Road after leaving the start at the TT Grandstand. Leading (from left to right) are East German Gunter Baumann (292cc MZ), Czech Arnost Zeman (173cc Jawa) and M Vytlacil (248cc Jawa) ISDT 1965 (Speedtracktales Collection)

Photo Welshman John Lewis (348cc AJS). He was one of the three competitors from Britain to win a Gold medal and must be assured of a team place next year. He is seen here negotiating a dry-stone wall at Spanish Head  ISDT 1965 (Speedtracktales Collection)

Photo not far from the water works at Ramsey, Belgian Vase teamster Marcel Vervier retrieves his 173cc CZ from a ditch after a spill ISDT 1965 (Speedtracktales Collection) 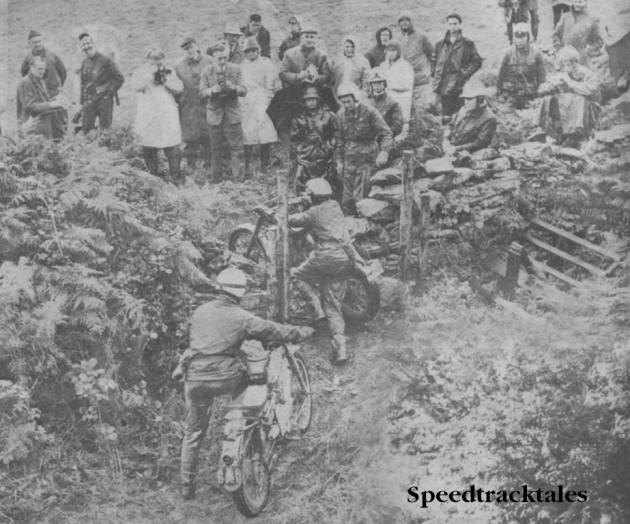 Photo Top left West German Rupert Beppler (74cc Zundapp) struggles as he tries to overcome wheelspin on slimy rock slab in a gateway into a field by running alongside his machine. Waiting to go through is Lorenz Schunemann (73cc Simpson) ISDT 1965 (Speedtracktales Collection)

Photo if West German Hans Schilte (17cc Hercules) puts his back into it as he descends a steep grassy slope at Spanish Head. He finished and won a Bronze medal. ISDT 1965 (Speedtracktales Collection)

Photo in the working area Siegfried Rauhut (49cc Simpson) of the East German Vase ‘B’ team changes a cush drive rubber at the finish of Wednesday’s run. ISDT 1965 (Speedtracktales Collection)

Photo – seeing the ISDT for himself is Denis Howell MP, Minister of Sport ( in light raincoat) with behind him Hugh Palin IA Director and Peter Fraser. Mr Howell recommends Government grants for sport…. Rider is John Lewis (AJS) [BCG 980 B] of the British Vase ‘B’ team ISDT 1965 (Speedtracktales Collection) 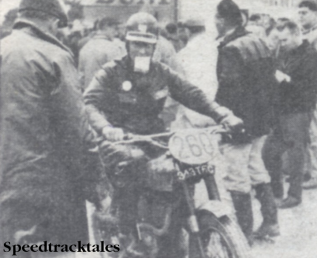 Photo Private owner #260 Bill Faulkner (343cc BSA) at the finish control on Friday. He pressed on doggedly to collect a well deserved Bronze Medal on the same machine he uses for one day trials. ISDT 1965 (Speedtracktales Collection)

Time for a cuppa…

Image of scanned advert for ISDT 1965 success by Castrol 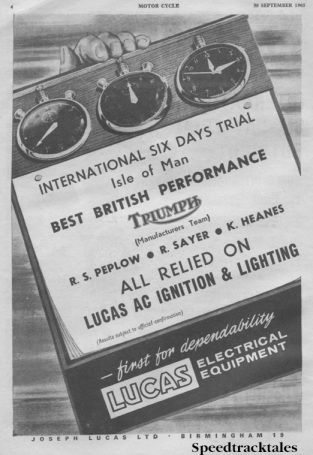 Image of scanned advert for ISDT 1965 success by Lucas 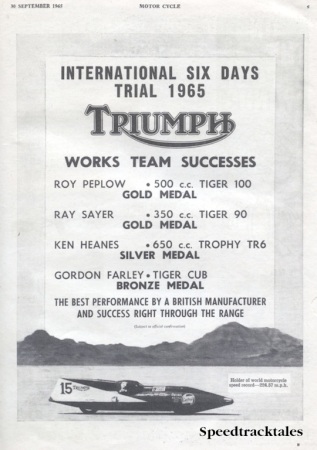 Image of scanned advert for ISDT 1965 success by Triumph 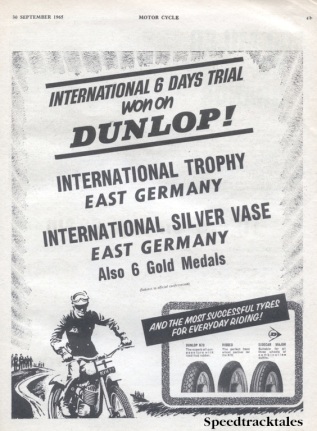 Image of scanned advert for ISDT 1965 success by Dunlop 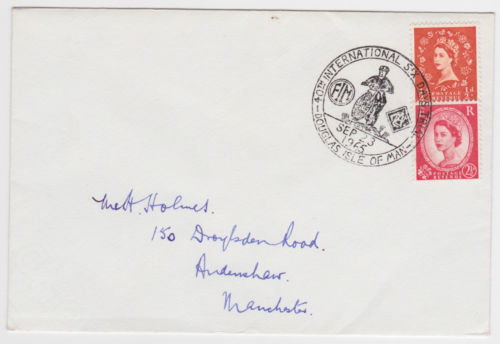 I note in the British Film Industry ‘s website, a film is listed called ‘International Six Day Trial‘ made by a reputable producer of the time ‘Peter Mills’ and is about this ISDT in the Isle of Man if anyone can tell us more about about it or even locate a copy we would be most grateful. You can also check out some enjoyable videos of this and other events on our video gallery.

If you have any more memories , photos or memorabilia connected to this event please do not hesitate contacting us if you are able to share with us.