“Have you seen about 140 Germans with motorcycles”

After recovering and reading old material on the many ISDT before the Second World War it is evident that any average Britiah person who read the national or local newspapers, went to the Cinema or listened to the radio (BBC was the only choice) would have been aware the ISDT had been competed whether it was held in this country or abroad. The media of the day heavily featured it in sports reports and on news reels. Like todays Formula 1, even if you were not fussed about it you would know it was on.

In 1937 after 3 years on the continent , Germany being precise, the event returned to the UK in July 1937 and like 1933 it was held in Llandrindod Wells in Radnorshire, Mid Wales. The Germans having hosted the event had perceived it to be both an important sporting event that winning satisfied their self-belief of superiority and also provided worthwhile training for military motorcycle specialists. 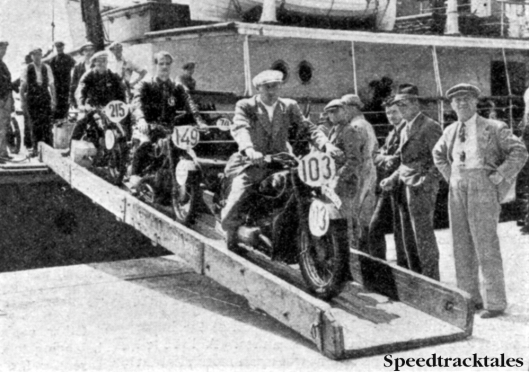 Photo – The German’s have arrived! three of the German Contingent for the International Six Days Trial landing at Southampton last week. The two leading machines are BMWs and the third on the gang plank is a Zundapp. On the exterme right is a popular ‘International’ figure – the interpreter. ISDT 1937 (Speedtracktales collection)

As a result it sent a huge team with helpers over  which was reported by the editor of Motor Cycling in person visiting the docks in Southampton to greet them. The story told was that arriving at the docks they met an immense Policeman his breast a glitter with War medals, The editor asked “Have you seen 140 Germans with Motorcycles”
“No Sir” he replied politely, adding, after a contemplative pause “and if I did I’d run like ‘ell”

END_OF_DOCUMENT_TOKEN_TO_BE_REPLACED 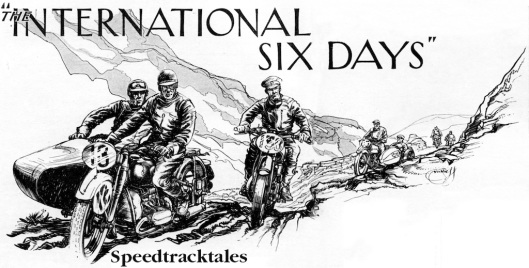 Great Britain wins the Trophy and Germany wins the Vase, Hühnlein and Bowmaker Team awards – A Difficult and Arduous Trial described by –

The ISDT 1938 was again, like in 1937, held in Wales and was based on Llandrindod Wells in the County of Radnorshire now part of Powys. 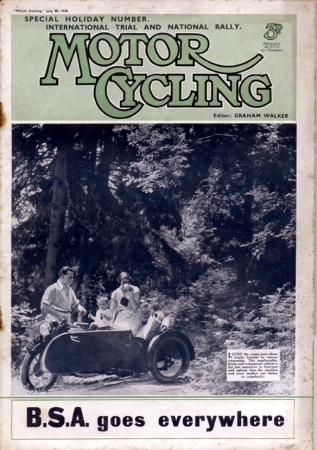 ‘Motor Cycling‘ were part sponsors of the ISDT in 1938 and their coverage was spread over two issues. We have the main issue of the 20 July 1938 which resumes the coverage of the first day from the 14th July issue. as well as covering the results and the awarding of the Trophies which this year the ACU had arranged its National Rally to coincide with the ending of the ISDT near Donnington Race Circuit at which the Trophies were awarded before a large crowd of motor cycle enthusiasts.

Read a copy of the 20th July 1938 issue at our library at issuu.com below (requires Adobe Flash support)

Graham Walker the father of the famous sports journalist Murray Walker summed up the two events as follows:

END_OF_DOCUMENT_TOKEN_TO_BE_REPLACED

The 1965 ISDT was the event’s return to the UK since it’s visit to Wales in 1961. Any reader doubting of the significance of the event in the national sporting calendar at a time the national motorcycle industry was a key player in the economy can be reassured by the official visit of Denis Howell MP, the British Government’s Minister for Sport, who crossed the Irish Sea to watch what became a wash out. 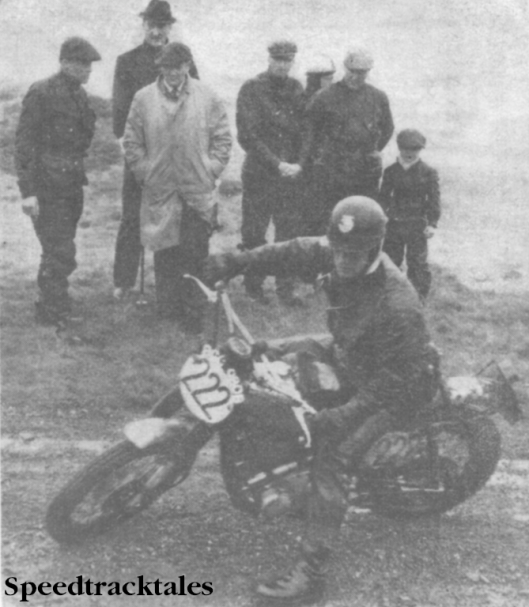 Photo – seeing the ISDT for himself is Denis Howell MP, Minister of Sport (in light raincoat) with behind him Hugh Palin IA Director and Peter Fraser. Mr Howell recommends Government grants for sport…. Rider is John Lewis (AJS) [BCG 980 B] of the British Vase ‘B’ team ISDT 1965 (Speedtracktales Collection)

‘the Motor Cycle‘ report said “In the toughest, roughest, most demanding International Six Days Trial in memory – probably ever – East Germany repeated last year’s victory by taking home the Trophy and Silver Vase. Their six-man Trophy team and four man Vase team were all MZ mounted. They led in both contests by devastatingly big margins. What is more, their teams were the only ones to finish without any retirements.

Readers with browsers supporting flash can view the whole ‘Motor Cycle‘ article via our issuu.com library below