“On Epiphany Day, January 6, 1951, I started my motorcycle competition career at the ice rink at Isny,” remembers Herbert Schek (shown here at age 45). “It was my first opportunity to race, having just gotten my motorcycle driving license a few days before,” Schek adds. And at the end of the day, the tall, 18-year-old youth held his first winner’s cup. He explains with a laugh, “The others were so fast that they all fell. I was slow enough that I made it to the finish line without crashing once!”  Now, 57 years later, this 75-year-old German motorcycling legend is still active in off-road competition, consistently placing highly in vintage enduros. Week after week, he pushes his red BMW to the starting line while his contemporaries go walking with their grandchildren.

A year after his first ice race, Schek, whose friends and fans know as “den Langen aus Wangen,” meaning “the tall one from the city of Wangen” because he is over six and a half feet tall, participated for his first time in “Gelaendesport” (enduro competition) at the Oberallgaeuer Mountain Ride. Schek found enduros the perfect form of competition for his limited budget, requiring only knobby tires and a high pipe to convert his road bike to a suitable off-roader. The German Enduro National Championship program began in 1955, and Schek entered with an Austrian Puch (shown above), but with not too much success. Schek recalls, “Often the G’lump (meaning ‘junk’) failed me. Once the front forks broke, and another time it was the frame.” While Schek placed well many times during the series, the occasional machine failure kept him from winning the championship. That finally changed in 1962 when he earned a Maico factory ride, delivering the Swabian company the 250cc title his first year aboard the bike. During the 1960s and ‘70s, he would deliver a total of six championships to Maico.

Although Schek won most of his championships aboard Maicos, most people associate him with BMW, which he started riding some forty years ago. Schek recalls, “In 1965, I won my class in the very difficult Three Days of Passau, and Hans von der Marwitz, the development manager at BMW, asked if would ride his motorcycle in 1966.”  Schek delivered for BMW with a victory in the open class at the International Six Days’ Trial at Karlskoga, Sweden, but the very next year the Munich firm shut down its Gelaendespt program, so it was back to Maico. Then, in 1968 he switched to a 350cc Jawa, sponsored by Neckermann, the German Jawa importer. Then again, in 1969, von der Marwitz contacted Schek, explaining that BMW was coming out with an entirely new motorcycle that would be built at its new factory in Berlin, and he was looking for someone capable of riding a prototype R75/5 at the ISDT, which would take place at Garmisch-Partenkirchen, just weeks away. Schek signed on, and Kurt Distler rode a second factory machine. Paul Hanemann, the Director at BMW, told the riders that the company had won 148 FIM gold medals, and that he was counting on them to bring the score to an even 150. Schek says, “When I asked why he had not prepared four machines if what he wanted was two medals, he reacted with utter astonishment that anyone could doubt the success of BMWs.” As it turned out, Distler’s motorcycle failed, and in 1970 BMW returned to the ISDT with a four-man team team in the United States in 1973.

However, Schek had discovered that the big boxer twins were too heavy to compete effectively against the British singles, and he advised von der Marwitz that the motorcycles needed to be slimmed down to 150 or 160 kilograms. Von der Marwitz responded that this was quite impossible, and Schek said, “Okay, I will build my own BMW.” BMW provided materials to Schek’s specifications, and he reduced the machine to an incredible 135 kilos, then later to 125 kilos. So unique were these specials, they became known as Schek BMWs.  Schek is shown here aboard one of his special BMWs in 1978.

When the ISDT came to the United States in 1973, BMW wanted to put on a big show. The American market was very important, and the Bavarian firm hoped to build its image consistent with the reputation of the new /5 model line, which was more sporting than the old, heavy /2s. For bragging rights, BMW had already given ISDT organizer Al Eames an R75/5 with special high pipe and other modifications for his use in laying out the course, and at the parc ferme BMW erected one of the largest displays of all of the manufacturers. Schek took responsibility for building four motorcycles for a Silver Vase Team, but between his delivery and arrival of the motorcycles in Massachusetts, someone at BMW made changes, without informing him. Schek says, “I was annoyed because I was responsible for these motorcycles, and after our arrival in America, I converted my own machine again.” He adds,“The nights in New England were icy cold, and we had never tested the motorcycles for cold starting in the morning. They had no choke, and they would fire, but it was impossible to keep them running because they were too lean.” Schek modified the floats in his carburetors to richen the mixture, and won another gold medal, but after its expensive and unhappy American experience, BMW again shut down its off-road factory team.

Schek returned to Maico, which by now offered a 504cc – a motorcycle far more suitable to his imposing size – and he won the open class in 1975 at the ISDT at the Isle of Man. Then Schek changed to what was surely the most exotic and unusual motorcycle of his off-road riding career. He explains, “Sachs asked me to help them build an enduro bike with a Wankel rotary engine. We set the rotor longitudinally in the frame and mated it to a seven-speed gearbox.” Schek rode the Sachs Wankel in 1976 and 1977, after which Sachs abandoned development of the rotary engine and canceled its off-road program. But by this time, BMW was developing its new G/S model, which would awaken a new interest in Galaendesport during the 1980s, especially when the OMK – West Germany‘s motorcycle sport governing body – created a new enduro class for 750cc and larger engines. There was suddenly so much demand for big off-roaders that Schek found himself with orders for seventeen of his ultra-light Schek BMWs, some with engines even larger than 1,000cc!

At the international level, the FIM had a class for 1,000 to 1,300cc machines. Perhaps others did not study the rules closely enough, but Schek is what Germans call a Schlitzohr, a clever follow who can see the gaps (opportunities) in the rules. As a result, in 1980 Schek became the only person to win an enduro championship in the 1,300cc class aboard a 1010cc motorcycle. The following year the FIM revised the rules to make the open class 600cc plus.

In 1981, at the Isle of Elba, Herbert Schek entered his 25th ISDT. He says, “After the event, an officer of the OMK came to congratulate me. He said that 25 was a record that could never be bettered, and now it was time for me to step down for the younger ones.” Schek shakes his head in disbelief, “It is an attitude I simply cannot understand. Why would one ever quit?” (Schek’s record of 25 ISDT/Es held until 2006 when American Jeff Fredette surpassed that number in New Zealand.) Schek went on to prepare BMW rally bikes for the French distributor, whose riders Hubert Auriol and Gaston Rahier won the Rallye Paris Dakar in both 1983 and 1984. Schek also has ridden Paris Dakar fifteen times, winning the Marathon Class in 1984 before he was refused a racing license due to his age. Still, Herbert Schek (pictured above) rides on, and today der Lange aus Wangen remains one of the most popular figures in German vintage enduro competition, where he can be seen week after week, pushing his original red Schek BMW to the starting line.

The following images were all located with help from an American BMW forum many of them without any details and often unknown sources from the posters. These may be in the ISDT some in Europe but may include non ISDT events. Please let us know if you know where? 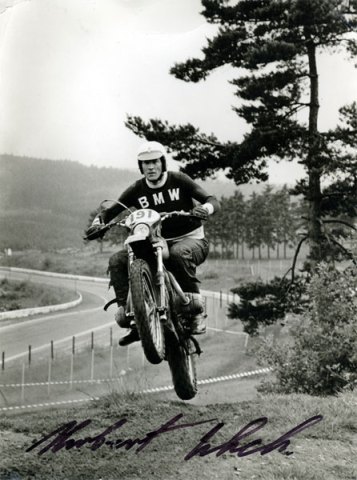 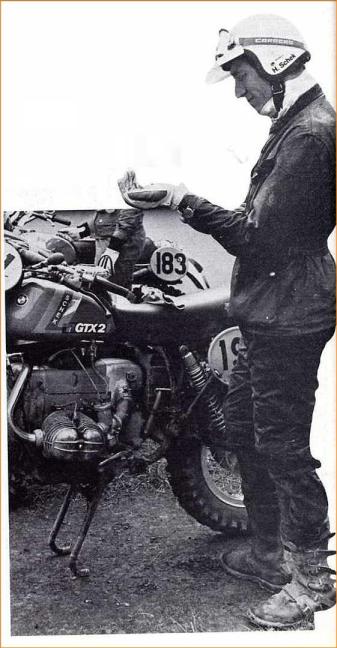 Photo of tall #191? Herbert Scheck and his BMW in an unknown event possibly an ISDT 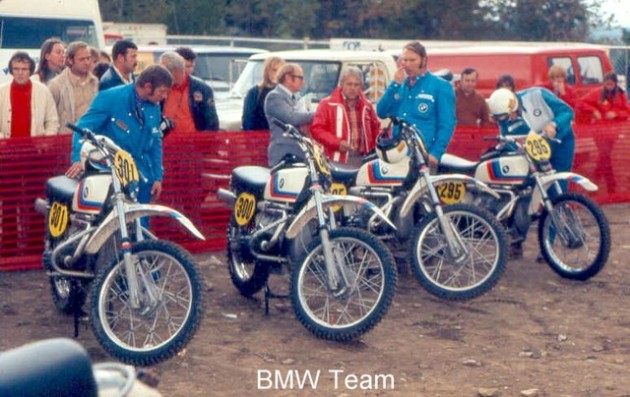 The above picture is worth making a comparison with the works BMWs ridden by Rolf Witthoeft at the 1980 ISDT which were so well designed it remains a shame none of the original bikes survive only perfect replica copies.

The blow photos taken in 2011 come from a Vintage Enduro event in 2011 with Herbert Scheck at 78 still riding for fun. 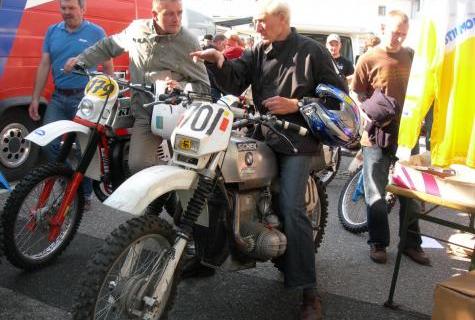 All photos provided by Leo Keller.

Speedtracktales is grateful to Leo Kellar, the writer, and Ed Youngblood, the publisher, for their permission to reproduce these articles in Ed Youngblood’s Motohistory http://www.motohistory.net

Born in 1951, Leo Keller rode his first Gelaendefahrt in 1972. In 1995, he began to ride vintage enduros, participating all over Europe and three times at the ISDT Reunion Ride in the United States, 2001 through 2003. He writes a monthly “Klassik” page in the German magazine Enduro, plus features in Enduro and the Australian magazine VMX. He is author of the books “KTM: Motorraeder seit 1953” and “Enduros und Galaendesmotorraeder – Germany and Austria: 1960 – 2006,” and has written features for Motohistory about Sachs/Hercules (See Motohistory News & Views 5/17/2006) and DKW/MZ (See Motohistory News & Views4/10/2007).

11 thoughts on “Herbert Schek: a giant of the German ISDT scene”