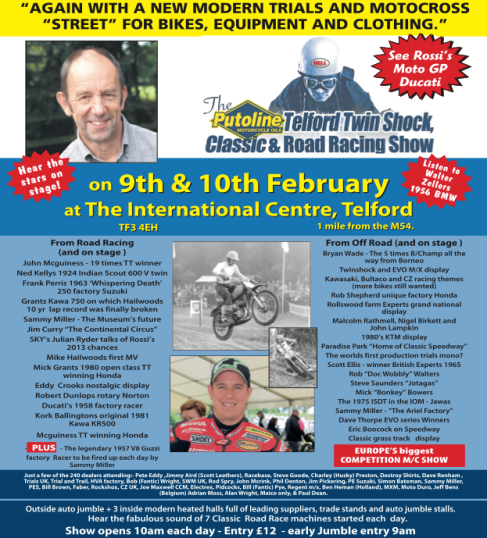 News of a show in Telford this coming February featuring ISDT related memorabilia and bikes – dont miss it especially the following of interest to the history of the ISDT.

In 1975 the ISDT was run in the Isle of Man. The 6 man UK trophy team was, for the first time, to ride Jawas supplied by the uk importer Bickers, under the management of Ken Heanes and Chris Oliver. Ken and Gold medallist Dave Smith have now died whilst Ernie Page is now in America but at the Telford show the remaining team members Mick Bowers, Jon May, Dave Jeremiah and John Pease will meet up again for the first time in 3 decades. Dave Bickers will also be there and will be bringing along  two of the bikes actually used in the event. Chris Oliver and ISDT legend Arthur Browning will add to the entertainment as the team is interviewed on stage by compere Colin Dommett .

The image of motorcycle racing is often defined in popular culture by the vision of men motors and leather. There should, however, be no doubt throughout the history of motorcycle sport, which predominantly post dates the era defined by Women’s campaigns for the right to vote and the germination of the principles of equality the ACU banned their taking part in road racing in 1925. Women although few in number instead became active and competitive entrants in off road motorcycle racing Cottle and Edyth Foley both winning Gold Medals in the ISDT in 1925.

Marjorie Cottle competes in the ISDT 1939

In more recent times riders like Katrina Price have been able to show women are as competative and skilled as men and able to take on events of the severity of the ISDT/E. The involvement of women in the sport is featured in its own page. END_OF_DOCUMENT_TOKEN_TO_BE_REPLACED

The development of off-road motorcycle sport has formed a key part of the social history of the Welsh nation, and it’s English Borders. The first popular affordable vehicle for many of its people, also provided mobility in rural areas and led to many owners taking bikes up for recreation uses from which developed competitive riding. Wales’s abundance of natural rugged terrain also meant the motorcycles were often used in challenging conditions. This gave rise to the earliest development of trials, scrambles and their in-between relative, the Reliability Trial which is today goes by the name Enduro.

With all social history the legacy can often be best appreciated through the archives of the work of the professional photographers of the time. Geoff Charles was one of the most important photo-journalists active in Wales at the time covering all aspects of life, political, sport and culture. He was a professional Photo-Journalist working most of his life in Welsh Speaking Wales. Born in Brymbo Wrexham 1909, he obtained a degree in Journalism from the University of London.