This page will feature a series of articles dedicated to recording the history of some of the most popular sections of the old ISDT which often followed popular historic roads that have since either been surfaced or left to go wild.

Image – Although there are no observed hills in the International, there are plenty of steep hills on the course. Here is H.W. Croucher (598 Panther sc) leading W. v. Millenkovich (248 Püch), Austria, up the 1 in 3 1/2 gradient of Allt-y-Bady.

image – The majority of the under – 100 cc machines found Allt-y-Bady too much for them. W. Zylaard and J.G Heusden walking up alongside their D.K.W.s ISDT 1937 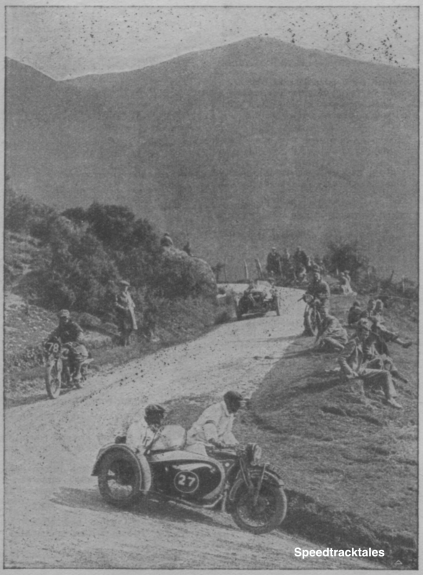 Bwlch y Groes, Bwlch Eunant and Hirnant – Not only made famous by motor cycle endurance records but since it was tarmaced for a number of years was a famous feature of the Milk Race and other major cycling races.

Photo – #96 T Stewart (346cc Royal Enfield) and a non-competitor amidst some of Wales’s grandest scenery. They are climbing the famous Bwlch y Groes. ISDT 1933 (from Speedtracktales Archive)