The pages connected to the ISDT 1964 produce heavy traffic for the site.

Never more so in Hollywood did an actor maintain a loyal fanatical following as Steve. Not because he was particularly cookie or that his Shakespearean appearances were milestones. Its because for all the hype most stars get nobody knows who the heck they are off set. They lock themselves away at night in Beverley Hills and do what? we don’t know but Steve… he was a racer he raced anything if it had a motor, he collected it if it had a motor, he hung out with guys who dug motors. Steve was a Petrolhead and so much so he allowed his passion for motors flow into his work. The passion he had for his stuff makes his films stand out. It’s a bizzare coincidence that his birthday falls within a day of the anniversary of the break out in the real great escape, the film he piloted one of his beloved Triumphs to do many of his own stunts in the film not just relying on the great Bud Ekins to do his stunts and one of his hallmark pieces.

END_OF_DOCUMENT_TOKEN_TO_BE_REPLACED

Stange title for this blog .. surely we all must know by now, but I have noticed in my site stats, the search engine query list keeps showing ‘What year did Steve McQueen Race the ISDT’ is a common search and is bringing a lot of visitors to the site and the Steve McQueen pages are getting a lot of action so I decided to google the search phrase to see what’s up?

it was then I discovered this year Barbour are running a promotion on the back of it’s Steve McQueen Limited Edition collection to win a trip to this years ISDE in Sardinia, this year is the 100th anniversary of the first ISDT. So not to let anyone else miss the chance to have a go at this wonderful opportunity to experience and ISDE wearing one of Barbour’s iconic ‘International’ motorcycle off road jackets here is the competition. If you don’t win and want to know a bit more about the ISDE and ISDT why not catch up with the Anniversary event being held to celebrate the centenary of the holding of the first ISDT in Carlisle in the English Lake District in August 2013 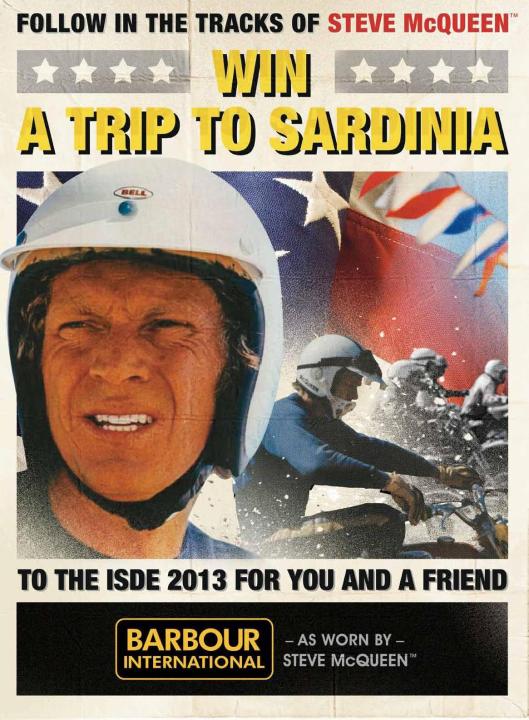