It’s that time of the year, the first 2015 from Bonham’s, this time in Las Vegas 8th January 2015, which for any grown kid with a love for heritage motorcycles is the biggest candy store of all time. Often with prices so high it is an insight into what the multi-millionaries of the world like to do with their small petty cash. 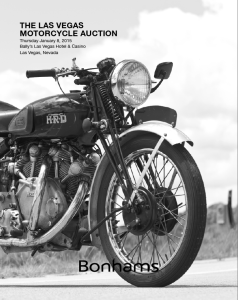 As ever there is a wide range of quality Indians, Harley’s including Dirt trackers and other American makes but like always there is a very strong showing of quality British Classic hardware especially from Triumph but including Vincent, Brough, AJS and Matchless.

END_OF_DOCUMENT_TOKEN_TO_BE_REPLACED

the ISDT 1950 saw the Silver Jubilee of the International Six Days Trial. In the 5th October edition of ‘the Motor Cycle‘ appeared a three page photo review written by George Wilson based on his own experience of the event as he followed it riding a works Triumph Trophy that had been prepared for S.B. Manns that had been loaned to him this is the report: 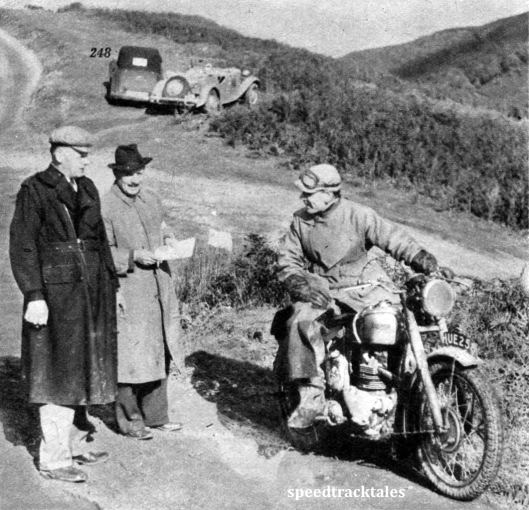 Photo – Chat near the check George Wilson with the Triumph [HUE 258], Fred Anning on the left and Frank Jarman ISDT 1950 (Speedtracktales Archive)

TWO hundred and thirteen starters, 132retirements, 81finishers: that, briefly, presents the picture of the International Six Days’ Trial held in Wales the week before last. Tough though the International always is, the Silver Jubilee event undoubtedly went along way towards establishing a record in this respect. During some period every day there was rain, and there was heavy rain every night, so that the ground conditions, already vile before the trial began, remained vile, and, in many cases, became steadily worse as the week progressed.