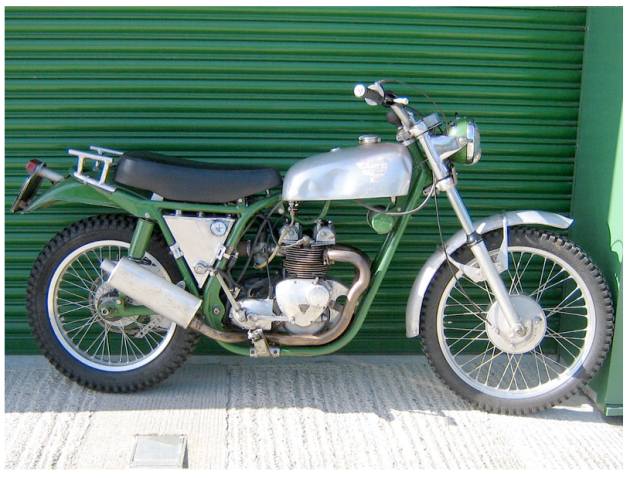 Dick Sutton is an all time great of British ISDT scene, not least his retirement saw him move to the Elan Valley where he ran a succesful Trail Ridings holiday company where he was able to introduce many riders to the trails that had been part of the history of the ISDT in Mid Wales over its duration.

In 2012 H&H the specialist classic vehicle auctioneers advertised an Auction to tale place at the Imperial War Museum at Duxford on the 19th April 2012 ( the bike was again listed in a subsequent auction 23 Oct 2012 guide price £8=10,000). In the catalogue is listed an interesting ex ISDT Cheney Triumph which was ridden in the 1968 ISDT held in San Pellegrino Italy. Dick Sutton had been a leading privateer in the ISDT 1967. This is the detail from the catalogue entry and a link to the entry document as a PDF.

The decline of the British motorcycle industry towards the end of the sixties presented the ACU with a dilemma. The rules governing the ISDT stipulated that riders must use machines of their own nationality, a clause that in 1968 restricted the choice of suitable machines for British riders, particularly in the larger classes. In response they turned to Eric Cheney. Eric Cheney had enjoyed a successful competition career before concentrating on frame production, initially building a Gold Star powered machine. His products, which were hand built using the finest materials quickly built up a formidable reputation. For the 1968 ISDT he built a limited number of machines for the British Trophy team using a tuned Triumph 500 twin. Eric Cheney was at the forefront of suspension development which the ISDT machines benefitted from.

This example was ridden by Dick Sutton in the 1968 ISDT held at San Pellegrino in Italy to a bronze medal. It is presented to a good standard having formed part of a private collection.”

PDF Catalogue
Further researching this Article reveals that this bike was previously listed on eBay in 2011, but nothing in yet known about if it was sold or not. However the discussion of that sale on a number of blogs questioned some elements of the authenticity of the bike. As a result of that discussion other pictures of the bike were found both at the time of it’s eBay sale and back in the days it was being ridden by Dick. My obvious thanks go to a number forums dedicated to the Cheney and Triumph marques for making putting these images into the public domain

Photo of Dick Sutton’s Cheney Triumph #135 on which he won a Bronze Medal, this photo was taken at the ISDT of 1967 in Poland by Brian Catt 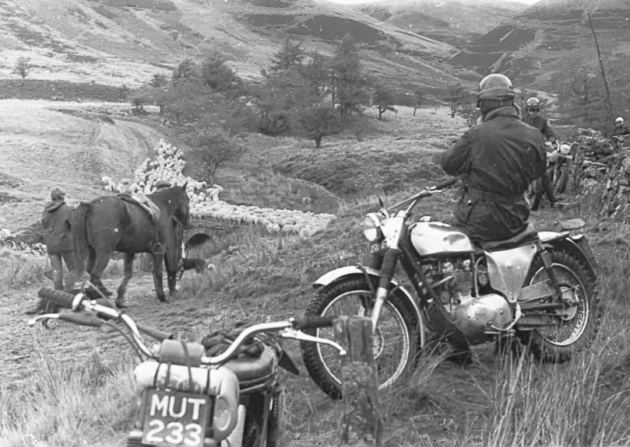 Dick’s bike is here in civvy mode out for a day’s trail riding during a BMF Trail riding weekend in Wales, based on Brecon, the Bantam being “Muttley”. We had pulled off track to allow safe passage for the sheep who where being brought down to the farm from the hills. Dick moved to the Elan Valley area and ran Trail Riding holidays from his home which were very popular in their time. The bike [MUT 233] was a BSA Bantam belonging to Brian Catt who took the photo.