Sadly this is a rather anonymous review of a Motorcycle we have no picture of. These comments were found hidden in the archive of newspapers in the National Library of Australia and come from the Asvertiser a newspaper of Adelaide, Queensland appearing to have originated in an article in Motor Cycling 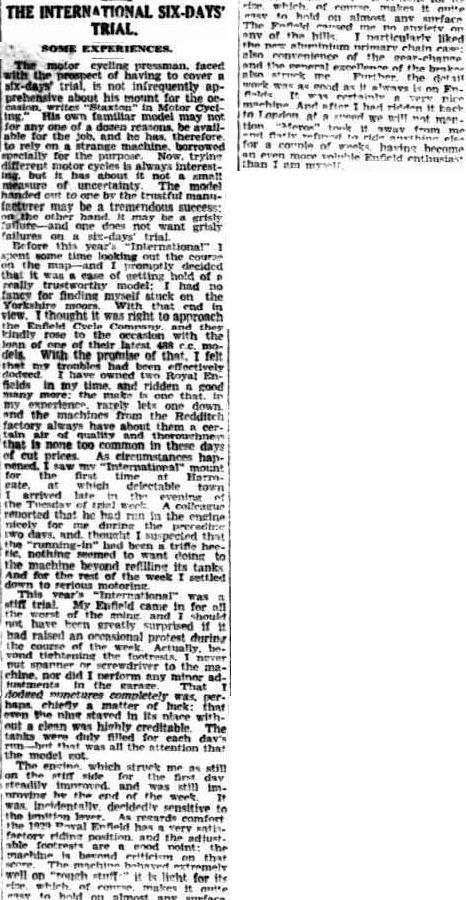 The motor cycling pressman, faced with the prospect of having to cover a six-days’ trial, is not infrequently ap- prehensive about his mount for the occasion, writes ‘Staxton’ in Motor Cycling.’ His own familiar model may not for any one of a dozen reasons, be available for the job, and he has, therefore, to rely on a strange machine borrowed specially for the purpose.

Now, trying different motor cycles is always interesting, but it has about it not a small measure of uncertainty. The model handed out to one by the trustful manufacturer may be a tremendous success: on the other hand, it may be a grisly failure — and one does not want grisly failures on a six-days’ trial. Before, this year’s “International” I spent some time looking out the course on the map and I promptly decided that it was a case of getting hold of a really trustworthy model; I had no fancy for finding myself stuck on the Yorkshire moors, with that end in view. I thought It was right to approach the Enfield Cycle Company and they kindly rose to the occasion with the loan of one of their latest 488 c.c. models. With the promise of that, I felt that my troubles had been effectively dodged. I have owned two Royal Enfields in my time, and ridden a good many more; the make is one that, in my experience, rarely lets one down. and the machines from the Redditch factory always have about them a certain air of quality and thoroughness that is none too common in these days of cut prices. As circumstances happened. I saw my ‘International” mount for the first time at Harrogate, at which delectable town I arrived late in the evening of the Tuesday of trial week. A colleague reported that he had run in the engine nicely for me during the preceding two days, and, though I suspected that the “running-in” had been a trifle hectic, nothing seemed to want doing to the machine beyond refilling its tanks And for the rest of the week I settled down to serious motoring. This year’s “International” was a stiff trial. My Enfleld came in for all the worst of the going and I should not have fceen greatly surprised if it had raised an occasional protest during the course of the week. Actually beyond tightening the footrests. I never put spanner or screwdriver to the machine, nor did I perform any minor adjustments in the garage. That I avoided punctures completely was, perhaps, chiefly a matter of luck: that even the plug stayed in its place without a clean was highly creditable The tanks were duly filled for each day’s run — but that was all the attention that the model got. The engine, which struck me as still on the stiff side for the first day steadily improved, and was still improving by the end of the week. It was incidentally, decidedly sensitive to the ignition lever. As regards comfort the 1929 Royal Enfield has a very satisfactory riding position, and the adjustable footrests are a good point; the machine is beyond criticism on that score. The machine behaved extremely well on ‘rough stuff’ it is light for its size, which of course makes it quite easy to hold on almost any surface The Enfield caused me no anxiety on any of the hills. I particularly liked the new aluminium primary chain case also convenience of the gear-change and the general excellence of the brakes also struck me. Further the detail work was as good as it always is on Enfields. It was certainly a very nice machine And after I had ridden it back to London at a speed we will not mention “M****” took it away from me for a couple of weeks having become an even more valuable Enfield enthusiast than I am myself.