This report appeared in the December 1926 issue of ‘Motor Sport‘ of a Sporting and Classification Trial held by the Liverpool M.C in North Wales starting from Chester. This trial shows that the riders by even today’s standards rode for a considerable distance on machines that today many would be surprised to find out how versatile these machines were.

END_OF_DOCUMENT_TOKEN_TO_BE_REPLACED

This report of the Hill Cup Trial, a reliability trial organised by the Sale and District MCC was found in the December 1924 issue of ‘Motor Sport‘. There are no images available with this report. The event is quite an epic starting in South Manchester. The ‘Colonial Sections’ were public road where a low speed average was maintained due to frequency of other traffic) A number of riders appear mentioned here also featured in contemporary event reports.

This Club’s Annual Hill Cup Trial was run off recently, in an interesting way, on lines which the Committee of the Club have found to be most generally acceptable to the average member. There were no checks on those portions of the route which ran along good main roads. There were some stiff hills to be observed and some short stretches of colonial section had to be traversed in order to reach them. Checks were instituted over the Colonial Section and hills only. The route led over Helsby Bluff and Glyn Ceiriog, and lunch was taken at Llangollen. After lunch Allt-y-Bady had to be negotiated and the run home from there was comparatively easy.

END_OF_DOCUMENT_TOKEN_TO_BE_REPLACED

The mission of SpeedTrackTales is not just to capture as a record the history of the people the bikes and places of the International Six Days Trial. It is also important we learn of, and reflect on the social and  cultural conditions of those times that contributed to both the development of the sport of Reliability Trials and its evolution to be renamed Enduro as well as the history of land access and the impact of the modernisation of highways and land management during the era. In many cases the sports happily co-existed with local people going about their own daily business.

The road twists and turns all over the place, and it seemed to be full of country folk shepherding home animals from Corwen market.

For this article reproduces an article written and published in the weekly ‘Motor Cycling‘ 28 November 1934. The article is a test of two models of Triumph the 5/5 and the Twin models for 1935. The test compromised of a tour around North Wales, but in particular it took in the classic roads in regular use by the ISDT and reliability trials of the time such as ‘the Reliance Trial’

Early on Wednesday morning we were skirting Bala Lake and heading for Hirnant Pass, en route for Lake Vyrnwy. The lane we traversed were shockingly surfaced. It was an endless procession of large culverts, cart ruts, slimy mud, rocks and everything else imaginable.

It is clear that by 1934 the area was very familiar to many in the Motorcycle industry as a place to both test Motorcycles and to undertake adventure tours by motorbike. It goes without saying to do this motorbikes were required to be reliable and handle well where road surface conditions were still poor. Places like the Bwlch y Groes, Eunant Pass and the Allt y Badi regularly feature in both test articles and event reports.

Long, gruelling climbs made no difference, either. Taking the Eunant Pass from Lake Vyrnwy,” we climbed another 1,000feet, which brought us out near the top of the famous Bwlch-y-Groes.

The article, coincided with the holding of the annual ‘Reliance Trial’ in the North East Wales area, the report for this event can be found here. 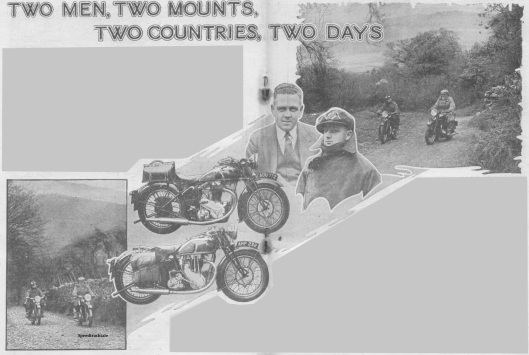 END_OF_DOCUMENT_TOKEN_TO_BE_REPLACED

The event which had become a classic on the British sports calendar was a reliability trial and not a sporting trial so the skill was sustaining riding for the duration of the event rather than excelling at specific section challenges. in 1935 the event was based at Mold in Flintshire although in its earliest years it had started on Merseyside with competitors travelling into North Wales.

IN spite of a timed restarting test on Allt-y-Bady and a short, rough section that had to be covered at not less than schedule speed, it was impossible to separate the performances of the only two riders who retained clean sheets in last Saturday’s Reliance Trial in North Wales. The two out standing men who were G.E.Rowley (560 A.J.S.) and L.G.Holdsworth (346 New Imperial), and as there was no rule giving preference to the smaller capacity machine, the two stand as joint holders of the ‘Reliance Trophy. Thus a most unusual situation is created, for It seldom happens in open events that the “premier” cannot be placed in one particular direction, especially when two special tests are used in view of possible ties.

This year the trial started at Mold instead of at Llangollen, although it finished at the latter place as usual. The change was thought to indicate that something new would be introduced, but the event was much the same as other Reliance Trials, with the hills of the Bady range as the notable obstacles, Heartbreak and Ken’s Cut in particular. Vron, that long grassy slope which seems endless (and surfaceless) on a wet day, proved no stumbling block on this occasion, and Allt-y-Bady, which is slowly reverting to trials calibre after being repaired a few years ago, was used for the timed restart. In spite of the 1 in 3.8 gradient now having a surface “like a heap of dominoes’.’ (as one rider put it), even two-fifties made no bones about standing starts, which is an indication of the improvement in modern engines and the grip of present-day “comp.” tyres. The sidecars, however, were not too happy; they needed all the urge available from a gradient point of view, and yet when their skippers “gave them the gun” it mostly happened that the front wheels caressed the earth lightly and sportively and the outfits slewed round crabwise, and that was that.

END_OF_DOCUMENT_TOKEN_TO_BE_REPLACED

Back in 1933 the International Six Days Trial (ISDT) first visited Wales and in a report in the ‘Western Daily Press‘ of the event, the course was described as requiring competitors each day to ‘ride over the most difficult and dangerous roads in the British Isles‘ this was Britain between the wars with little need to travel to far off countries for excitement and adventure. The ISDT started in 1913 and much of its course followed tracks that in pictures appear they were made for farm carts yet, today, many of them are surfaced ‘A’ class roads.

The fact was the nation’s road network  had been a considered such a national disgrace in the 1800’s that it required a Parliamentary Commission to fix, this ultimately led to the decision when establishing the new County Councils in the mid 1800’s for them to take over managing main roads. By the 1927 Local Government Act, what roads were left being managed by the District and Parish Councils were passed over the the County Councils. This was at a time there was an increasing demand by the public for the metalling of highways with the increasingly popular Tar Macadam to provide a level all weather surface better suited to the needs of motor cars.

Not a problem then worrying the ISDT organisers, who knew that many of the rural roads were still unmade and which, occaisionally, might only be treated to heaps of crushed rock to fill up holes to ensure the carts full of farmer’s turnips could be safely wheeled to market towns for sale. The roads of the early ISDT years were sufficient for their intended purpose to test motorcycle reliability. Although some private land was available for events, with heavy bikes with little or no suspension the public road network, as it was then, was more than adequate for the job. Local communities were also keen to see the event come though their area, both for the people it bought in and the distraction from the daily norm it gave to those in rural areas long before the distraction of TV or radio became popular social barbiturates.

In the Heritage Highways features we will try to examine a bit more about Roads that hold a particular iconic legacy for the event. If you have a candidate highway let me know, this is the first edition which is the ‘Allt y Baddy’, near Llangollen, Denbighshire. The earliest written reference to the road is found in a poem published in 1878 by the Welsh poet Ioan Myllon which is as follows

in english it reads

Ugly, black, dirty is Allt y Badi – so steep
It’s easy to slip on her
If I fell on her steepness
Wholly splintered my bones would be

END_OF_DOCUMENT_TOKEN_TO_BE_REPLACED

I was lucky to find the Geoff Charles collection whilst browsing the National Library for Wales Online Photo Collection where I also found these images.