The ISDT of 1963 took place in Jilemnice, Czechoslovakia now the Czech Republic

The little Czech town of Jilemnice saw only 3 of 24 National Teams emerge with ‘Cleans’ & East Germany MZ Machinery cleaned up the Trophy Cupboard.   Each and every ISDT event had the extra efforts made by some Competitors & this 1963 event was no different, ‘on the Wednesday the rectangular town prepared to close the day’s competition when the scream of a 300cc 2 stroke MZ on the limit rose to attract all & Bernd Uhlman flew into the timer’s sight at the arrival square & dashed his card into the time clock with roughly one second to spare.   Sufficient to avoid any penalty after being delayed repairing a puncture. 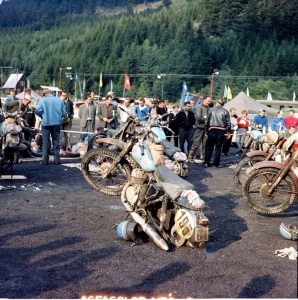 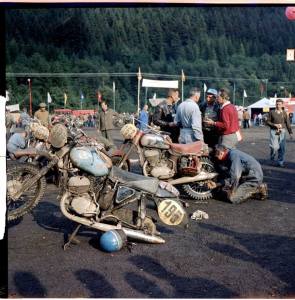 Britain’s riders & machinery now long on in time after winning the Trophy in 1953 & the Silver Vase 3 years prior to that, development in the commercial capitalist markets pursued from UK seemed reluctant to advance.

The above image was credited by Taff  as the Jawa Ad after the event withAustrian Vase teamster Johann Sommerauer Jawa, The results for the 1963 event and those for 5 years either side would not suggest this number was used on a Jawa although the Austrians did ride Jawa that year to 2nd in the vase the winning International Tophy was won by East Germany on MZs. The photo comes from an advert by Jawa from an undated US Advert. This is probably #229 Otaker Chasak on a CZ in the ISDT 1962 in Austria

Brits had come to admire the quiet light efficient MZs Bernd Uhlman 300 cc & fellow East German teamsters Werner Salewsky & Peter Uhlig used 250 7 175 versions & cruised to their Trophy win.  Immaculate turned out machines as usual by the Italians on Moto Guzzis whilst the oversize Czech 358cc machine ridden by Vladimir Stepan impressed all with bottom end sheer power.   When the actual number plus makes of British retirements is read thru, it shows how the development of BSA, others & Villiers had largely been visual and down to cost with minimal expenditure profit levels the aim rather than performance.   You do not compete in World Markets like that, Brits have always thought they could develop and produce fine things until competitors are underestimated..

The only Lady rider entrant was British Mary Driver who clung on to emerge with a Bronze on her Greeves.

Soviet man Vladimir Darvin on Wednesday gets past fallen Tony Sharp of the Barrow Club.

Although the GB Trophy team did not have a good ISDT this year the Vase ‘A’ team were third.

6th Day Mileage had reached 974 total, including Speed tests on a triangular 4.6 lap nr. Jilmenice, even riding to the Speed Circuit claimed Scott Ellis on his Triumph with a defunct gearbox & Bob Sharp (CZ)with a holed piston.   A tough Trial where 111 retired from the 280 starters, Golds won by 102, Silver by 40 & Bronze by 27.

This item turned up in an auction of 150 photos and negatives taken in the event by famous German Motorsport Photographer Ulrich Schrabb of Stuttgart at a UK auction 2011. They are listed as having not sold but having contacted the Auctioneers it appears they were subsequently sold in private. If any one knows about this collection please let us know.

In addition to the press articles and pictures we have a few video clips of this event here also for other events for you to enjoy on our video gallery. 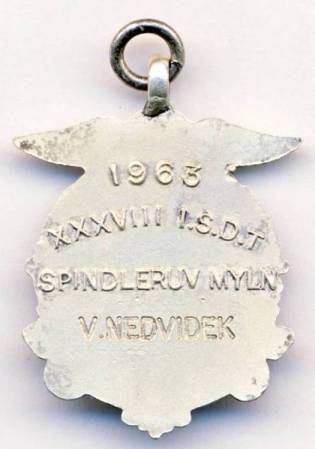