Common knowledge recognises that with a long involvement with the ISDT and ISDE including its founding in 1913 at an event in Carlisle Britain has won the International Trophy the most of any nation. However it is popular belief, held with some disappointment in Britain, that the last time Britain won the Trophy was way back in the ISDT 1953 held in Czechoslovakia. The following year they lost it in Wales, handing the Trophy back to the hosts of their victorious event in the previous year. However a question remains that was ’53 the last year. Many at the time held out the vbiew that Britain should squeeze an extra year of glory if the decision of the Jury about an accident on the route had not reinstated a Czechoslovakian rider, who many felt should have been excluded for breaching the rules. Below is a picture of the first and second team in the Trophy from Motor Cycling and below that is the text of the editorial that appeared in the post ISDT 1954 issue of Motor Cycling which explains the reason why British Riders and supporters were unhappy about the final result. 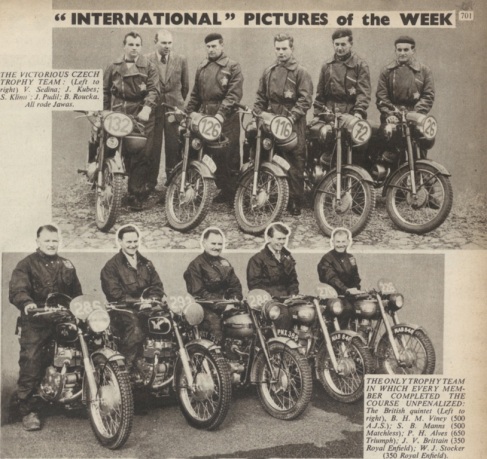 AT the conclusion of the International Six Days Trial the British Trophy team was the only one without loss of mark in its class which could claim to have complied with all the regulation governing the conduct of the event. According to those regulations, that team should therefore have been declared the winner of that class. That theTrophy was provisionally awarded to the Czech team was due to an extraordinary decision reached by the International Jury, whose members on the opening day sanctioned a breach of the rules by a Czech team man.

The facts of the case are that the rider concerned was in collision with a British competitor when the former was proceeding the reverse way of the course. His damaged machine was subsequently salvaged by the A.-C.U. recovery vehicle, taken to Llandrindod Wells and left in a public garage. The rider. having failed to complete the route, was debited with 100 marks and presumed to have retIred. He protested on the ground that he had gone off course through inefficient route marking. The Jury granted the appeal, cancelled the loss of mark and gave permission to the rider to fit a new front wheel, thereby sanctioning the replacement of a marked part. The British rider was not so fortunate, for his machine was damaged beyond immediate repair and he was thus forced to retire.

This action on the part of the Jury has established an exceedingly dangerous precedent, for if it can now be claimed that a competitor has completed the course in accordance with the rules when, in fact, he has not done so, where is such mistaken clemency to end? The rules state clearly that the responsibility for following the route lies with the competitor; that a driver more than one hour late at any time check will be excluded; that, apart from the period spent on the road, the machine must at all other times be in the custody of the F.M.N.R.; that throughout the trial the motorcycle must not be moved other than by

its engine, the muscular effort of the driver, or by some natural cause; that no sealed or marked part may be replaced by another part.

Each of the rules mentioned was broken in this instance and it is idle to claim that here was a case of bad luck which justified especially compassionate treatment. Consider the case of the British rider-who was the innocent victim of the collision; it is an odd “law” which permits one rider to return to the fray because he can repair his machine within a certain time, but which forbids another to do so because he cannot. The regulations governing the I.S.D.T. have been built up over a period of more than 40 years and to us it seem extraordinary that the Jury should have flouted them in as many minutes.

According to the translation from the original French text the F.I.M. rules state it is the task of a Jury to “supervise” the event to which they are appointed. To us, that word suggests their duty is to ensure that the published regulations are complied with. It certainly does not imply the right to delete or add to these rules on the spot, save possibly in the interests of riders’ safety. No question of safety can be raised in this instance and the position is made all the worse by the fact that although everyone has agreed that route marking was defective at a certain spot, the accident is believed to have occurred more than 20 mile from that spot.

There may be some justification for the Jury’s peculiar decision of which we are unaware, but if this be so it is a great pity the officials concerned did not issue a detailed statement to the Press. And it is an even greater pity that five days are alleged to have elapsed before an answer was given to an official “Request for Explanation” sent through the correct channels. Obviously the matter cannot be considered closed. The law must be the same for all. If it is not it is bad law.

We have written at length on this sorry subject because of its vital importance. We have been told that the principles which have hitherto governed the character of the I.S.D.T. may become the subject of a complete review. We suggest that until then those principle should be maintained by officials and competitor alike.”