Were’s going to re-sort these to more relevant sections if you see anything you recognise and can comment on please let us know.

Photo of Who what where when & riding which?, an old press cutting needs info. ISDT???

Photo of Maudes Trophy BSA Team Centre is Fred Rist, left is Norman Vanhouse & that looks like Brian Martin on the right?

Not ISDT shot but the Maudes Trophy BSA Team worth viewing, with ISDT riders.

Anything known of this machine’s history? Regular reader Richard Ross has been able to help with this reply ”

The machine is a Royal Enfield Bullet 500 with the high performance ‘Bighead’ cylinder head (devised to accomodate over-size valves, and challenge the BSA Goldstar). The bike seems kitted out for the ISDT, but I have no idea who rode it, nor the year of its entry. Normally 350 Bullets would be entered, a 500 was an exception but not one I can discover recorded in any of the books I have consulted.

What I can confirm is that [NAB 842] is a ‘works’ – Worcestershire – registration, and was used on other competition Enfields. There are photographs of the [NAB 842] plate on a Bullet 350 (with standard cylinder head and rubber fork gaiters).”

The following images were all lifted off an American BMW forum man yof them withotu any details and often unknown sources from the posters. Many will be in the ISDT some in Europe but may include non ISDT events

unknown BMW #84. Possibly a late 70’s ISDT but might be another event. Any one recognise this at any time in its life who can enlighten us? 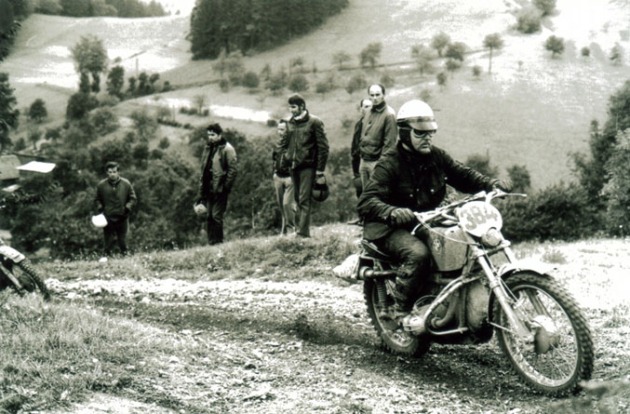 Photo of  #384 BMW but quite possibly has that ISDT feel to it – is suggested to be Bernhard Koln on a 1970 works BMW? 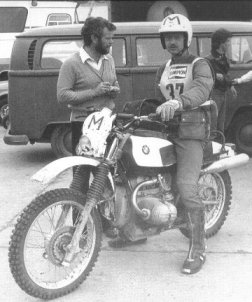 Photo of an event official marshall on a BMW is this an ISDT? who and where would be nice if you can help.

Photo of #96 BMW with rider in an event which might be the ISDT but it may be something of a national or regional event in most likely Germany. Any ideas would be welcome