The route description below is the one provided in the official programme accompanying the event which can now be viewed on this site in its full booklet form via our issuu.com library. More information can be found on the 1937 ISDT event page including detailed mapping from the programme of the actual route taken.

THE ROUTE OF THE 1937 INTERNATIONAL SIX DAYS’ TRIAL

COMPETITORS in the International Six Days’ Trial who took part when the Trial was previously held in Wales in 1933, will find the course this year fairly reminiscent of the earlier event, as a great many of the sections used in 1933 are again included. Indeed, it would have been impossible for the organisers to do otherwise in such an area, which, to those used to the space available on the Continent, must appear somewhat prescribed. Main roads with heavy traffic such as one encounters to the north and south, and in the coastal parts of Wales must be avoided, and, as far as possible, those small towns and villages, where” thirty mile per hour” limits exist have also been left severely alone. Briefly, the plan which appeared best to fit the conditions involves a series of five overlapping loops. 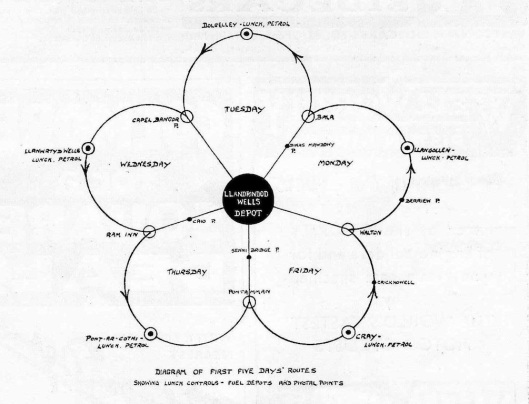 image of pictorial diagram of the route of the ISDT 1937

On Monday, July 12th, for example, the route follows up and down secondary roads for most of the way to Walton (missing, however, this year, a narrow loop south of Cregrina) and at this point turns north into new country by Berriew and Llanfyllin. This section includes in the main, fairly wide secondary roads, but in places rather wide rough sections intervene, with occasional short climbs and descents, and a good deal of twisting and turning. Similar conditions prevail until the course converges upon its 1933 equivalent at Llanrhaiadr, although it does not follow strictly the old itinerary. A narrow loop is avoided after Llanarmon. and a detour is made round Glyn Ceiriog to get to the foot of Allt-y-Bady, a hill which presents little difficulty nowadays. Competitors are then brought back in almost a circle to Llangollen, where the luncheon check is situated. After this, the 1933 route-fairly good, but along twisty secondary roads-is followed back to Bala, and thence over the well-known passes of Hirnant and Eunant. Bwlch-y-Groes is descended on this day, and after passing through Dinas Mawddwy, competitors may settle down to 9 1/4 miles of main road to be completed at a fair speed. Next comes a wild section, via Staylittle, with rather fine scenery and fairly rough going, but for the most part open roads. The return to the depot is effected via a check near Llanidloes and Pant-y-Dwr, over increasingly good surfaces.

Tuesday’s run retraces the incoming stages of Monday’s route, as far as Bala, climbing Bwlch-y-Groes and the near sides of the passes descended the day before, but from Bala new ground is broken, and a fairly difficult rough section follows to Pentrefoelas, returning after a short loop in a northerly direction to the check on the main road nearby. From this point, to the luncheon check at the Gwernan Lake Hotel good speed can be made, although the last few miles must be treated with due respect. Competitors from abroad may find in the little hotel perched on the side of a lake, a resemblance to many such places in their own countries. After lunch, there is again a fast section, and the road skirts gloomy Cader Idris, which rises to a height of 3,000 feet. At Talybont, the smooth wide highway gives place to the more usual twisting secondary roads which bear the riders away from the outskirts of Aberystwyth. Return to the depot is almost direct, and follows the old coach road to Rhayader, passing close to the Elan Valley Lakes whence the city of Birmingham draws its vast water supplies.

On Wednesday, off to Capel Bangor, where the marking turns to the south and follows pretty good roads of varying widths to Tregaron. Here the course strikes boldly on to one of the wildest pieces of country to be found in this part of the world. This section has not been used before in a Six Days’ Trial, although organisers have cast longing eyes upon it in the past. Fords which might become formidable in stormy weather have previously prevented its use, but this year’, arrangements have been made to avoid this danger, and substantial bridging will be carried out where and when necessary. Wednesday’s luncheon check in pleasant surroundings at the Abernant Lake Hotel follows shortly afterwards, and then a main road section is enjoyed at increasing speed past the shoulder of the “Sugar Loaf ” – an easy but twisty climb and descent. At Llanfairarbryn there is a check, and a sharp turn to the right off the main road, followed by fairly easy and not too rough by-roads through Cilycwm to Farmers. From here, the course loops to the north to include the section used in 1933, on to Llandewi Brefi – it begins with an easy ascent, part of which is grass-grown and it may be slippery if wet. The course then returns south without particular features to Ram Inn, near Lampeter, which is the pivotal point for this day and for Thursday. Pleasant scenery and easy travelling continues through Caio and the outskirts of Llandovery on to Llangamarch Wells. Shortly after this, moorland roads of good width carry the competitors to a point just north of Upper Chapel and, skirting Builth Wells, they get back to the depot via Newbridge.

No description of Thursday’s route in the first stages is needed, as far as Ram Inn, but after this, the course turns south, and after passing Brechfa, explores some of the slimy rough lanes which proved rather difficult in 1933. The Luncheon check for this day is at Cresselly Arms in Pont-ar-Cothi, and from here, the old route is followed homewards nearly as far as Llandovery. Not for long, however, as more miles must still be covered to complete the day’s run. So back again to the south-west on good roads through pretty country, passing Dryslyn Castle to Ammanford, this day’s pivotal point. The scenery here is rather marred by mining activities, and competitors will be glad to emerge once more on to the high moors, where the pure upland air defies the smoke and dust of the valleys, and passing through Trapp and Pont-ar-Llechau, Senni Bridge should soon be reached, as the exercise books say,.. without tears.” After various detours of no special interest, the final section begins at a place which rejoices in the name of Llandefaelogfach, and becomes fairly difficult in the vicinity of Crickhowell. The course soon returns to good roads, however, and the last few miles of main road to Llandrindod should be covered with ease.

The usual repetition-in the reverse direction-occurs on Friday, although on this day, Ammanford is left by a journey to the south over some lovely unfrequented moors to Llangwig, the beginning of a fairly steep descent to another smoke-ridden valley. Then ensue more high moors and more low mining country through Ystradgynlais and Glyntawe until the tiny village of Cray is reached, where the village hall provides surprisingly good accommodation for lunch. The well-known section from Heol Senni to Ystradfellte follows immediately, and at Penderyn, the course turns sadly away from Dinas Rock, where so many competitors met their fate in the 1933 event. The mining town of Merthyr Tydfil is avoided by a left turn at Cefn Coed on to a good secondary road until Torpantau station is reached. After this, conditions again improve somewhat, and roads of good quality, with occasional exceptions, continue through Craswall, Hay and Newchurch to the final check at Walton. From here, roads already described bring back the competitors to the depot, with only the Saturday’s run and the Speed Test before them.

Farmers and others responsible for the movements of animals along the roads, have been informed as far as possible of the direction of each day’s run, and the arrangement of the course generally has been based on the known incidence of fairs, market days and sheep dipping days. Competitors should, however, remember that animals may be found straying on the roads; the average speeds have been set with these conditions in view, as well as with the knowledge that a remarkably small number of “thirty mile per hour” stretches will have to be negotiated during the week.