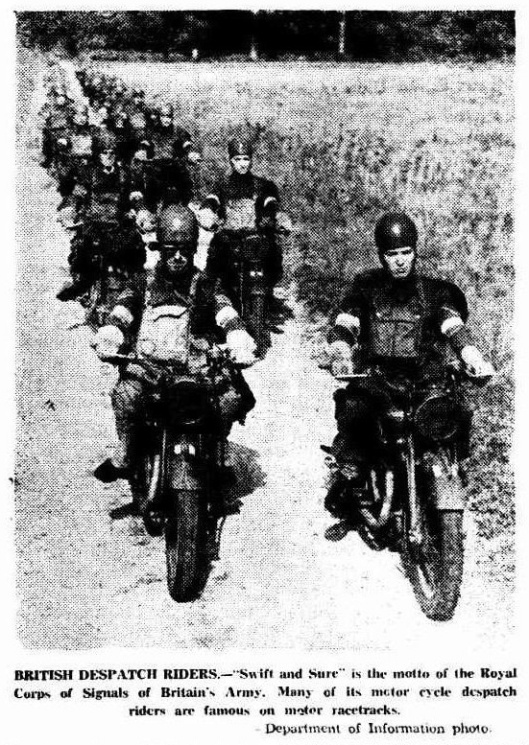 Image scanned photo from article ‘the Recorder’ 21 June 1941 BRITISH DESPATCH RIDERS.—”Swift and Sure” is the motto of the Royal Corps of Signals’ of Britain’s Army. Many of its motor cycle despatch riders are famous on motor racetracks. – (Department of Information photo).

Many of the works riders when drafted into the forces in 1939 who were not already army riders found their skills were sought after to ensure the army had a full compliment of riders who could take motorcycles into action.

Long before the days of fax, wifi or satellite internet if the man at the front needed a new map or images they had to be taken and so the dispatch rider was critical to not only being the eyes of an advancing army but moving its information around.

This situation did not go without its sacrifices and on all sides of the war and the invaded nations riders who competed in the Six Days died in circumstances nobody should find themselves in. I had been looking for an ISDT weighted article on Wartime Forces Dispatch riders for both of the last two Remembrance Sundays but failed. I was therefore delighted to find this first hand account of the Army Dispatch riders being trained published in ‘the Recorder‘ a local newspaper of Port Pirie in South Australia which I discovered in ‘TROVE‘ the online archive of the National Library of Australia.

courtesy of the British Army authorities a correspondent of “The Recorder” has been privileged to see the proficiency of the modem army motor cyclist and his machine.

“The army motor cyclist,” the correspondent states, “is being trained under cross -country conditions as bad as could be found anywhere. He is, in motor cycle language, a ‘crack’ rider and he knows his machine down to the smallest nut and belt.

“Every officer in the British army is a motor cyclist — well trained in riding and in the maintenance of his machine. I have spent days with the Northern Command on wild, precipitous, and muddy moors, watching officers and men train.”

The first day was devoted to a demonstration by eight army and civilian   experts. The standard of performance may be judged from the fact that seven of the riders have represented Britain in the International Six Days’ Trial.

‘”Each expert was in charge of a hazard, chcsen to represent eight differ ent kinds of obstacles a motor cyclist may meet in action. The riders, all of   whom were army motor cycle instructors or potential instructors, were divided into eight teams of 15 each,”

The organisation was perfect. With clockwork precision the teams arrived in turn at each hazard. Machines were parked in neat rows while the expert explained the object of the hazard and demonstrated the right and wrong ways   of tackling it. Each rider then made two attempts, leaving enough time afterward for the expert to say a few words of commendation, criticism, and advice.

“Hazard number one was appropri ately named ‘the unclimbablo hill.’ Its object was to demonstrate the art of turning round and coming down should a rider find himself unable to reach the top. The turning round was neatly carried out by tilting the machine to one side and swinging the front wheel from lock to lock, when it slowly slithered round and finally faced downhill.”

A section of rough switchback in and out between trees had been chosen for hazard number two. and the third was the descent of a grassy slope at an angle of 35 degrees with a sharp turn at the bottom.

“I found Bert Perrigo (a British representative in the International Six Days’ Trial on six occasions) presiding over hazard number four. It consisted of a weedy pond crossed by a narrow bridge. The bridge had been blown up (theoretically) and the army riders had to pick a way through the bog. Men and machines were well plastered with mud before they got through and several had to call for the towrope.”

Half a mile across country came the remaining four hazards, first a slippery upgrade, then a two-feet deep ford, a climb up a loose surfaced hill on a curve, and a short, steep climb over’ rocks.

“In every case it was impressed upon the men that the sole aim should be to get through with as little injury to themselves or their machines as possible. Any method that would be unorthodox in trials riding was permitted providing that was achieved. There were no penalties for using the feet unless in such a way that there was a danger of broken ankles.”

A crash-helmeted despatch rider overshot the marking tape outlining the sharp curve at the foot of the hill. “What would you have done if that” marking tape had been the edge of a precipice?” asked the officer in charge when the rider rejoined up at the top. “He thought, a minute. ‘I’d have lain my bike on its side, sir. and slid it down,'” he said.

I will continue to seek for information about the riders who fought on either side in the war during those dark days that the ISDT was suspended and the immediate post years because of the shortage of many essential resources.