Recently arrived at the Speedtracktales Checkpoint central was the two issues of ‘the Motor Cycle’ of 16th and 23rd September 1948 with a full report on the opening of the ISDT 1948, which was held at San Remo, Italy.

You can read both of the articles by following this link to our issuu.com library.

Sweeping Victories In the Most Important Trial of the Year

WHlLE there have been International Six Days’ Trials over even worse road surfaces than those included in the event which ended last Sunday at San Remo, there has never been a more grueling event. The fact that 81 of the 151 who started retired during the week is a  commentary in itself. Any rider who retained a clean sheet and thus gained his gold medal can be very proud of himself. Not only has he shown outstanding skill,  but a high degree of courage.

The maker of his machine can be proud, too, because the “International” is a test  of destruction – just that. What makes it so is the average speeds demanded. Even the most famous riders in the world had the utmost difficulty in achieving the time schedule. They were riding beyond the safety limit over many of the 1,272 road miles.

Special congratulations go out to the British Trophy Team which, by losing no marks, won the contest among national teams easily, and to the manufacturers of their machines:- A. Jeffries (Triumph), C.N.Rogers (Royal Enfield), V.N.Brittain (Royal Enfield), B.H.M.Viney (A.J.S.) and J.Williams (Norton). No fewer than seven nations competed for this coveted  award.

In the Silver Vase competition Britain, too, was the winner with her No.1 team which also lost no marks:- P.H.Alves (Triumph). C.M. Ray (Ariel) and W.J.Stocker (Royal Enfield). For this there were eight countries competing and no fewer than 15 teams.

In addition a British manufacturers’ team was one of the only two of such teams to finish without loss of marks and the British Sunbeam Club gained the first and second places in the club team contest. Of the 26 Gold Medals awarded to riders who completed the course without loss of marks, 11 of those medals were won by British riders and machines.

A word must be said, also, of the many who journeyed from England to help as team officials and assist our riders. Finally, congratulations to the Federazione Motociclistica Italiana whose organization of the event, while not flawless, was extraordinarily efficient having regard to their being given the task only some four months ago. 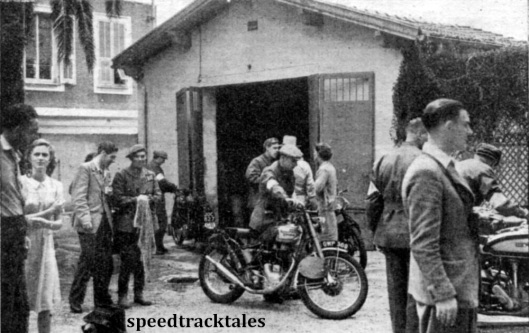 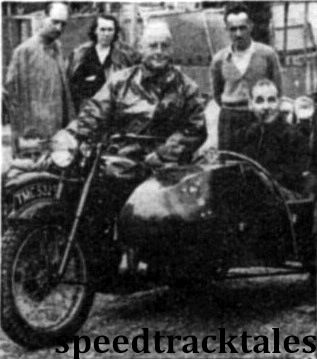 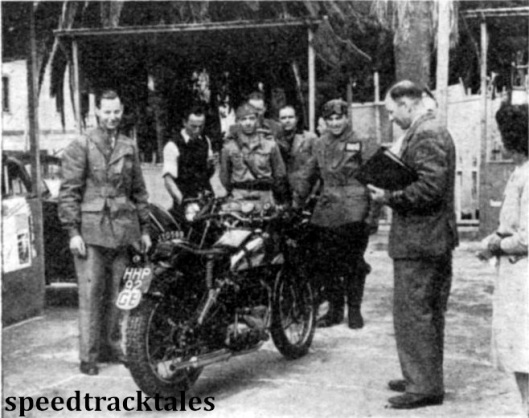 photo – At the weighing-in on Monday. Press wallet in hand, the Editor, Mr Arthur B. Bourne, looks at A.F. Gaymer’s Triumph [HHP 92]. Peering straight into the camera is G. Eighteen. ISDT 1948 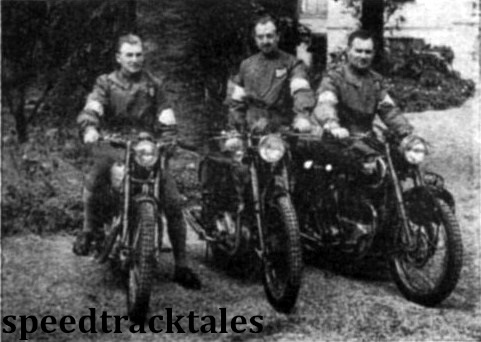 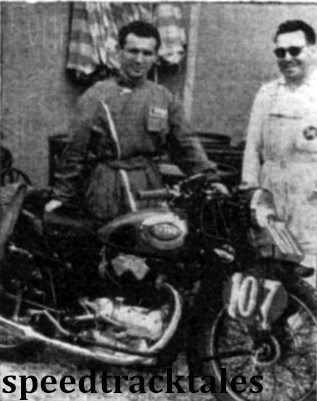 Images from the issue of ‘the Motor Cycle‘ 23 September 1948 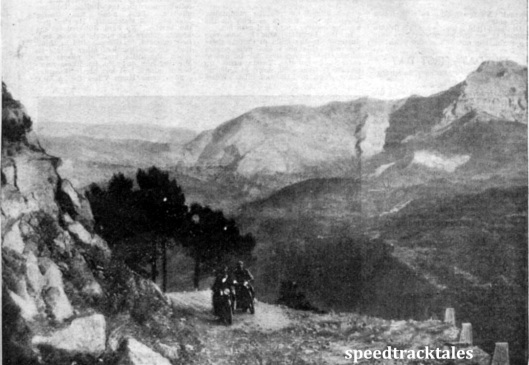 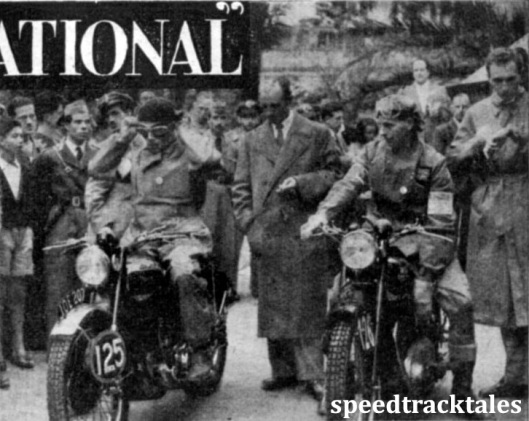 photo – A scene that will evoke momories among D.R.s (Dispatch Riders – Ed) who served in Italy. The terraced hillside is a typical Northern Italian panorama. #118 Hugh Viney (498 A.J.S) of the British Trophy team, is just leaving the check. ISDT 1948 (Speedtracktales Collection)

photo – Time check in a mountain setting on the way to Carpasio. The rider is J Roest (495 B.S.A twin), a member of the Dutch Vase “No. 2” team. ISDT 1948 (Speedtracktales Collection) 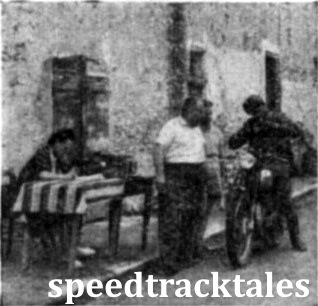 photo – The tropical-like background to the check at Albenga, with J. C. de Wit (125 Eysink), Dutch Trophy team, at the table. Other riders are waiting their turn to check in. ISDT 1948 (Speedtracktales Collection)

Photo – Bend after bend – and a surface worthy of observation in a one-day trial. Yet a high average speed had to be maintained over such going. The rider is A.J. Blackwell (Norton) of the British No 2 Vase Team. (Speedtracktales Collection)

photo – T.U. Ellis (Royal Enfield) lost one mark on time when he had a puncture. ISDT 1948 (Speedtracktales Collection)

photo – A general scene typical of the Ligurian Alps. Villagers come from near and far to watch the competitors in this trial of trials. ISDT 1948 (Speedtracktales Collection)

photo – The coast route in the Riviera di Fiori passes through scenes of breathtaking beauty. But H.R. Taylor (998 Vincent-HRD sc) and his passenger have little opportunity to appreciate it. ISDT 1948 (Speedtracktales Collection) 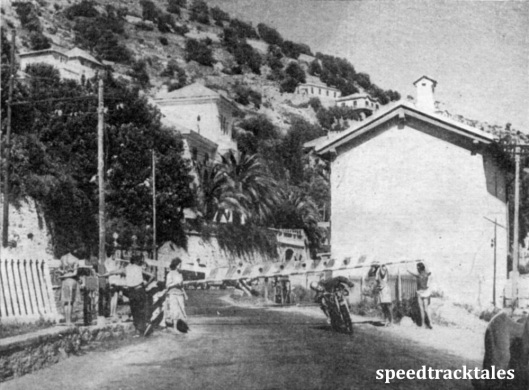 photo – A Crash-hatted competitor ducks under the barrier at a level-crossing on the main Genoa railway line. Competitors are helped in this way while ordinary traffic was held up. ISDT 1948 (Speedtracktales Collection) 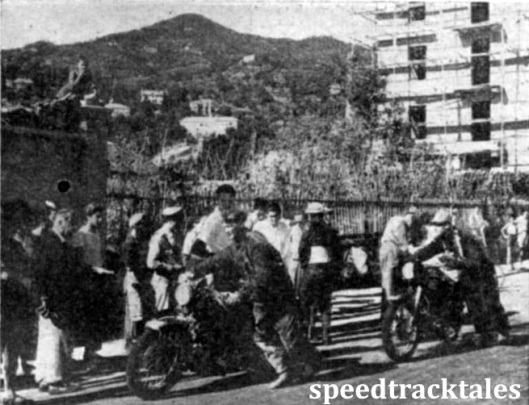