This year the ISDT held the 50th edition, billed as the Half century event and 62 years after the holding of the first event, this year on the popular island venue of Great Britain, the Isle of Man, famous for it’s Historic and Iconic Tourist Trophy Road Race  every year on the public roads and held to the thrill of Motorcycle enthusiasts from across the world.

I am grateful to discover ‘Dave’s Tests and Articles’ website where a copy of the American ‘Cycle World‘ report in colour has been posted which has provided some of the material used the expand Taff’s original feature below.

Originally the 1975 ISDT was intended to take place in Austria, but less than 12 months before the intended September 1975, Austria withdrew its offer and resulted in last minute struggle to find a significant new venue at such short notice. It was finally agreed to remove the event to the Isle of Man with the date pushed back to October. In the end the Russian’s decided not to attend.

Changes to the rules this year included a daily penalty to a Trophy team missing a rider. In addition a one minute late allowance at checks was introduced which protected riders from loosing the chance to gain a gold medal if within one minute late at the check.

Two British Trophy riders dropped out on the night before the start, and with only one reserve rider allowed in FIM rules, the jury at the last minute agreed to allow a second reserve, Nick Jeffries, moved up from the Vase Team to stand in to bring the team to full strength. However by the end of the first Day the British and US teams had lost a Trophy Team rider.

The event was struck by bad weather later in the week which decimated the field, in addition to this were two fatalities where tragically two riders died. The first was #20 Brandan (Bren) Moran, Jawa 350, who was an American from New York riding with the Canadian team who had died of injuries sustained from a crash, possibly due to an error of two riders meeting head on, on an abandoned Railway trackbed used as part of the course. 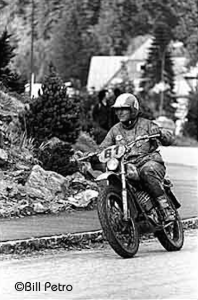 The second was #207 Jeff Gerber Penton who was an American Rider who crashed on the road into a truck.

Dwight Rudder of USA GS 175 possibly at the IoM event.  However as gently pointed out by Leo Keller he would have been using the USA team blue-white Skunk stripe, so we have to say we are unsure whether he rode in the IoM event.

Photo of racing in progress on 6th day at ISDT 1975

6th Day here is a Pic kindly allowed to us, here is the abandon on the Isle of Man Race Course, the arrow shows Heorges Marliere on his 175 Puch. Many Thanks to

The Wankel Rotary engined machine, probably (not certain) it was 1975, ridden here by Doug Wilford of Amerhurst/Ohio who imported the bikes into the USA, Italian team man Ivan Saravesi also rode one along with Germany’s Fritz Wetzel.  All Hercules Wankel motor powered, DNF:- Wilford retired with broken ribs, I understand the pic belongs to Doug Wilford.  Info like this stores history for all & we must thank the great Leo Keller for his help identifying for us. 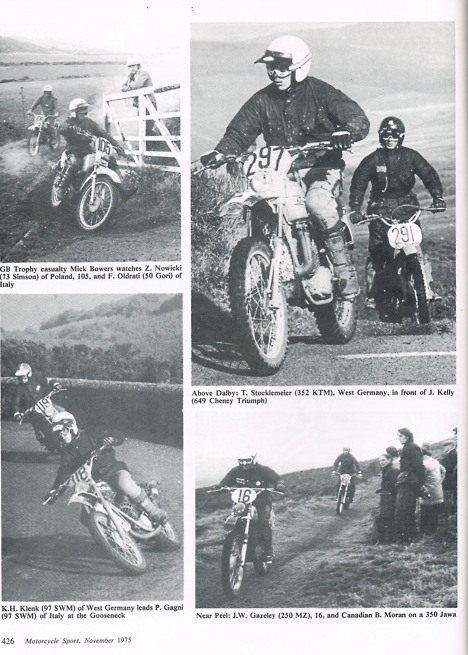 Image of Scanned magazine from1975

The below images are from the website blackcatvintagetrials where they are accompanied by report in his involvement with the Royal Air Force Team equipped with the 125cc Swedish Monark which had the 6 speed Sachs GS motor…… what a machine!! A 125 that thought it was a 250 or better. Yes, Sweden’s answer to the KTM. 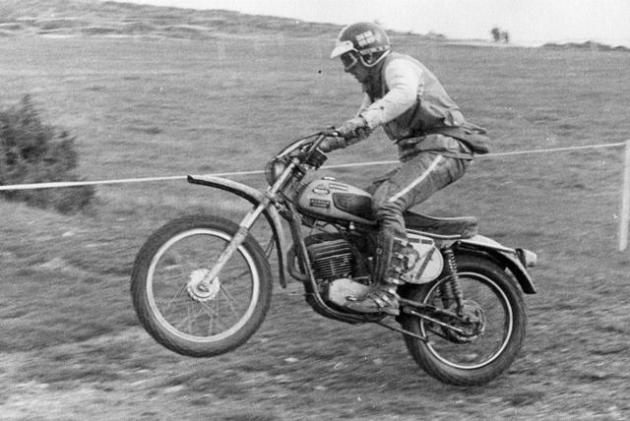 The following Images have been taken from a web page of the famous ‘Hot Grip’s heated handlebar grip website. This device became a stable grip for Enduro riders in colder climates. Designed by Jim Hollander a US Six Days rider his race career page is here 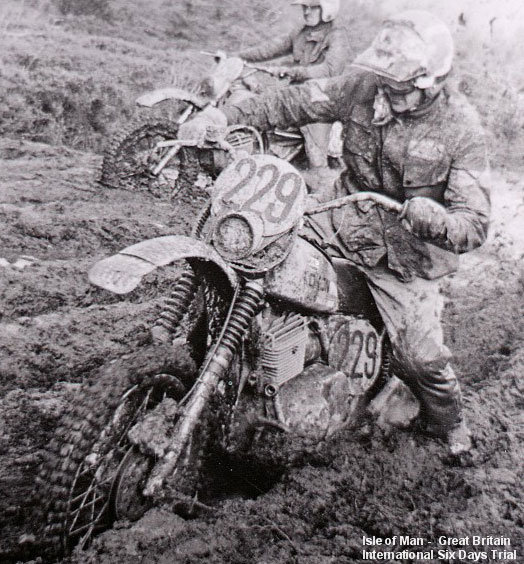 Photo of US Rider #229 Jim Hollander on his Automatic Rokon.

The mud at the Great Britain ISDT in 1975 took its toll on riders. Heavy rainfall and a course that ran the same trails in two directions every other day made it especially deep. Here you can easily spot the spare reinforced rubber drive belt wrapped around the headlight-number plate. The automatic transmission was fitted with a quick-detach cover and riders practiced to change the belt in several minutes. Fortunately the belts rarely failed, even when notched on the edges with a table saw to act like a rain tire in water-crossings. Rumor was that the Rokons couldn’t go thru deep water without difficulty, but wasn’t an issue with shielding and notched belts.

Only 2 Rokon finishers of five on the USA Team. Bronze Medal for Jim Hollander, and Jim Fogle. The Rokon Team suffered from requirement of spark arrest screens fitted inside the muffler. The 2-stroke oil mix in the gas left choking carbon deposits on the screens, dramatically reducing power. By the time the team discovered the problem, and poked a hole in the remaining Rokon spark screens, 3 USA team riders had dropped out. A 6th Rokon rider: Brian Taylor of Canada, retired the 3rd day.

Photo of US rider #229 Jim Hollander on Rokon. These rare American bikes featured many technical innovations apart from Fibreglass tanks that were subject to cracking they were the earliest Enduro Bikes to be fitted with Disk Brakes, they had Automatic gearboxes and belt not chain primary drives

Jim is loaded has a spare inner-tube on his belt, tool pack on the rear fender, spare belt for the automatic transmission behind the front number plate, rear axle rider’s wrench on the front down tube, & checkpoint time-card holder on the tank. The mud at the 6 day endurance event was particularly tough that year, though the Rokon did work well with the automatic transmission under such conditions. The U.S. built Rokon had disc brakes years ahead of the competition. Unfortunately Rokon Mfg. of New Hampshire fell into bankruptcy in 1978.

At the Six-Days twice a day there would be a special speed test, where riders are timed to the tenth of a second. The special test boundary ribbon is seen in the background. This ’75 photo highlighted a 2-page DIRT BIKE MAGAZINE article on Jim in 1976. Rokon’s racing expenses were a burden, and they couldn’t afford to continue the program for 1977. Although selected for the prestigious US Trophy Team, Jim was told in the summer of ’76 they couldn’t send him to Austria. Fortunately a trail riding motorcycle club came thru and paid Jim’s way to Europe. The next year Jim was off to UMass Mechanical Engineering study, rather than continue racing. That lead to development of the Hotgrips product line

Photo of that famous corner gives away the Isle of Man ISDT round in 1975, Italian Vase Team member #27 A Gritti on a 250 KTM puts style into rounding it.

Photo of#150 Jean-Louis Figureau at the 1975 event, see emblem/logo below.

Speedtracktales wishes to thank Marc Pétrier of FIM Information Resources who has facilitated the scanning of the FIM archive of ISDT results material and is allowing us to make it available here as a public service. Read a copy of the original Results and Stewards Report at the link below.

View the Stewards Report for the 1975 ISDT here

We recieved this from Geoff Staples,  so it is important & here it goes ONLINE .

“Liked your ISDT pics, just a small correction though, your pic showing the “Official” 1975 ISDT badge is not the official event badge, but is the badge actually denoting event officials. All Marshals and other officials were given these. The “Official” souvenir badge of the event was the same, but without the “Official” title underneath. Mine is a treasured possession, hard earned!”

(much more valued too I bet!)

A while back we ran a post “Refurbishing an old Hero” about an old 1972 MZ ISDT being restored. Andy, a Speedtracktales reader, has kindly provided a photo of his restored 1975 replica which still gets regular action during the summer on the daily commune. he recalls being in the IoM in ’75 watching these bikes going through the Speedtrap on knobblies doing over a ton. 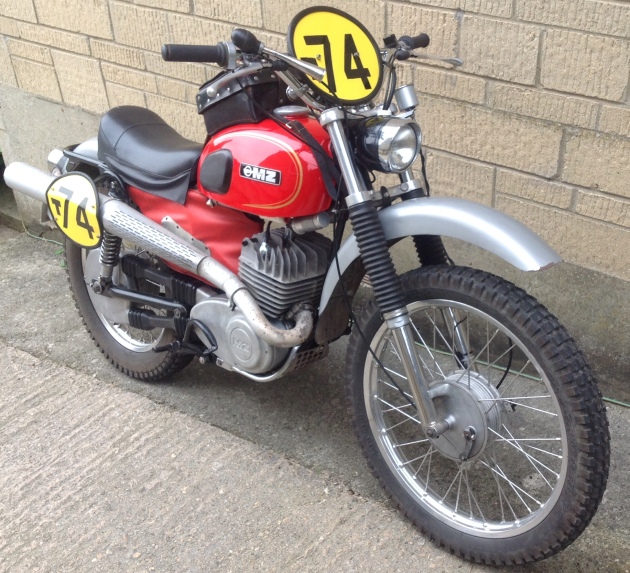 Speedtracktales is grateful to Morton’s Archive for their support.