The British Army’s presence has been one of prominence in the UK enduro scene since as long as I (new editor) became involved in it since in the late 70’s. At that time Service teams were both prominent with a long legacy of support for the sport including help for non service participants, certainly since the 1930’s. Not only did the service teams take part in events but without access to the British Army’s greatest training areas in the Brecon Beacons National Park it may have been difficult for anyone to have organised the several ISDT events that took place in Wales. The British Army Motoring Association has overseen motorsport within the army since 1960.

I even recall being told that when British Parliament introduced legislation limiting participants in road going motorsport events to 180. As a result of British Army interventions to government, both the ISDT and the Welsh Two Day Trial were given exemptions because of their importance in the Service training regimes so that they were able to get sufficient entries for service teams without it being at the expense of civilian competitors. 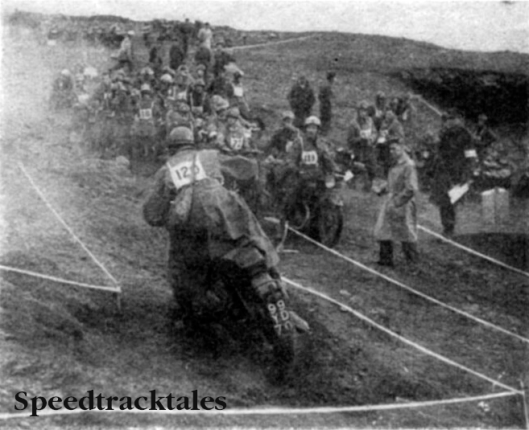 END_OF_DOCUMENT_TOKEN_TO_BE_REPLACED

Back in 1933 the International Six Days Trial (ISDT) first visited Wales and in a report in the ‘Western Daily Press‘ of the event, the course was described as requiring competitors each day to ‘ride over the most difficult and dangerous roads in the British Isles‘ this was Britain between the wars with little need to travel to far off countries for excitement and adventure. The ISDT started in 1913 and much of its course followed tracks that in pictures appear they were made for farm carts yet, today, many of them are surfaced ‘A’ class roads.

The fact was the nation’s road network  had been a considered such a national disgrace in the 1800’s that it required a Parliamentary Commission to fix, this ultimately led to the decision when establishing the new County Councils in the mid 1800’s for them to take over managing main roads. By the 1927 Local Government Act, what roads were left being managed by the District and Parish Councils were passed over the the County Councils. This was at a time there was an increasing demand by the public for the metalling of highways with the increasingly popular Tar Macadam to provide a level all weather surface better suited to the needs of motor cars.

Not a problem then worrying the ISDT organisers, who knew that many of the rural roads were still unmade and which, occaisionally, might only be treated to heaps of crushed rock to fill up holes to ensure the carts full of farmer’s turnips could be safely wheeled to market towns for sale. The roads of the early ISDT years were sufficient for their intended purpose to test motorcycle reliability. Although some private land was available for events, with heavy bikes with little or no suspension the public road network, as it was then, was more than adequate for the job. Local communities were also keen to see the event come though their area, both for the people it bought in and the distraction from the daily norm it gave to those in rural areas long before the distraction of TV or radio became popular social barbiturates.

In the Heritage Highways features we will try to examine a bit more about Roads that hold a particular iconic legacy for the event. If you have a candidate highway let me know, this is the first edition which is the ‘Allt y Baddy’, near Llangollen, Denbighshire. The earliest written reference to the road is found in a poem published in 1878 by the Welsh poet Ioan Myllon which is as follows

in english it reads

Ugly, black, dirty is Allt y Badi – so steep
It’s easy to slip on her
If I fell on her steepness
Wholly splintered my bones would be