The Speedtracktales Archive has seen the arrival of two original issues of ‘the Motor Cycle‘ from 22nd and 29th ISDT which will be covered by two separate reports. This one covers the full report issue of the 22 July 1937.

Photo – The Britain v Germany race begins. On the right is the smoke from the maroon. Note how No 193 J Stelzer (BMW) has been caught with both hands in the air, adjusting his goggles while the remainder are in the act of starting up and getting under way. The Trophy team men (left to right are Stelzer, VN Brittain (Norton) G meier (BMW) GE Rowley (AJS) L Kraus (BMW sc) and WS Waycott (Velocette sc) ISDT 1937 (Speedtracktales Collection)

In the issue editorial the merits of the organisation of the event , the location and requirements for such events are raised by the Magazine’s editor. This discussion was not new nor did it stop about the ability of Britain to deliver an ISDT event that met the increasing demand for more technical courses better suited to the modern lightweight motorbikes that the British Motorcycle Industry were….. not yet producing!! 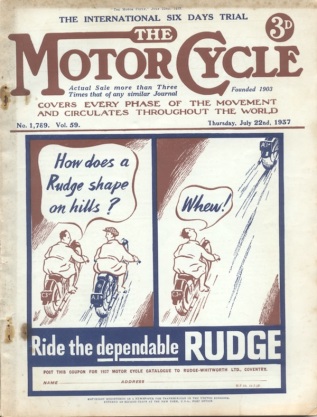 Once again a thrilling road race has decided the destiny of the International Trophy. In the high-speed test at Donington that concluded last week’s lnternational Six Days Trial two Trophy team started level with not a point lost – those of Germany and Great Britain – and the question was which team would gain the larger number of seconds over its set schedule. As will be seen from the description of the event on pages 112-122 Britain won by the narrow margin of ten seconds and thus retain the International Trophy.

That the margin was so small was not realised until well after the race had concluded. Those who watched imagined that Britain had won easily.

We heartily congratulate V.  N. Brittain (Norton), G. E. Rowley (A.J.S.), W. S. Waycott (Velocette sc.) and Waycott’s passenger, V. Mundy, and the makers of their machines upon the fine achievement. We also congratulate the German trio who came within an ace of winning, the Dutch B.M.W. team who won the Silver Vase and the German B Vase team who at one time were thought to have won. That this last team, on the sheets being checked, proved to be not first but second was indeed a bitter pill to swallow. Equally, all will extend their sympathy to the Czechoslovakian team and Vitvar, the rider concerned. In common with many others he missed a turning on Thursday, went off the route and then, of all possible misfortunes, ran out of petrol.
As a trial the event was easy. By the standard modern Internationals and having regard to the capabilities of present-day machines it was too easy. The fact that of the 213 starters 124 gained gold medals gives an indication of this. It is, however, difficult to know what the A.C.U. as organisers could have done to obviate it. The difficulties are numerous. For instance, many of the Welsh roads, which six or eight years ago were nothing more than rough cart tracks, are now tarred highways. Secondly, in this country, which has easily the greatest number of vehicles per mile of road, safety demands that the speed schedules are comparatively low. Thirdly, there are obvious practical difficulties in arranging a still larger number of time checks each day. As it was, competitors almost invariably found that they could easily make up anything they lost on a rough section because either before or after it there was a stretch of easy going. Had the checks been more numerous and the weather wet the results might have been very different.

What all must remember is that the A.C.U. had not the unlimited facilities or Government assistance as they have in Germany. We stress this because there was a considerable amount of criticism. Our opinion is that having regard to all the circumstances the A.C.U. ran the trial remarkably well. They were handicapped by the event coming so soon after the T.T. , by the smallness of a much-overworked staff, and by having few officials with experience of modern Internationals. We consider that the Union was set an almost unfair task by those who said the event must be run in Britain – that the right to organise this year’s trial must not be foregone – and feel that those concerned in the actual organisation deserve congratulation, not criticism.”

Read ‘the Motor Cycle‘ report on the event at our issuu.com library here