Olga Kevelos was one of the foremost and often admired of the women riders of the ISDT very forceful and singleminded when needed which as a rider gave perfect qualities to compete against and beat men with skill rather than brute strength. However she was know to throw the odd curved ball once in a while in her passion to seek change and improvement in motor cycle sport.

I was able to glean the following information of a radical proposal to restructure the ISDT being put forward by Olga Kevelos on behalf of the Midland Centre of the ACU.

“Revolutionary proposals for pepping up the International Six Days Trial by turning it into a mass start scrambles marathon over a ten mile course with 100 machines each shared by those rider are being considered by the Auto Cycle Union. And they could be put to the FIM for adoption at next year’s ISDT.

The scheme was proposed at Friday’s ACU general council meeting in London by Midland Centre delegate Olga Kevelos, a regular Six Days rider who won a gold in the 1949 ISDT

She stated the present event run partly over roads with frequent time checks, as a xxxxx embarrassment and anachronism.

In its place she called for a nine-hour-per-day scramble over a 298yd wide and as severe as the Scott Trials. Trophy Teams, she said should consist of four machines and 12 riders. There would be no capacity recognition. Any Motor Cycle could compete, including sidecars, and victory would go to the team completing the greatest distance.

So far the plan has had mixed reception.

On Friday the ACU’s ISDT Chief, Cliff King, agreed to consider it, most delegates were amazed.

On Sunday, veteran British ISDT teamster Ken Heanes said “It’s absolutely crazy, nothing but a relay race and loses al the idea of the ISDT. Certainly I’ll have nothing to do with it”

Sadly the next page is not available to view on the items listing and with past experience of 1960’s motorcycling newspapers falling into dust when being scanned and high carriage costs I am not entertaining purchasing the paper at the prices listed. Should anybody be able to recall the story from the time please let me know although we can be certain the wisdom shown by Ken Heanes prevailed and the rule book for the following years ISDT barely changed.

The same eBay seller also has this copy of ‘Motor Cycle‘ on sale for the 16th September 1967 which has the headline “Blow to ISDT Trophy Team”. 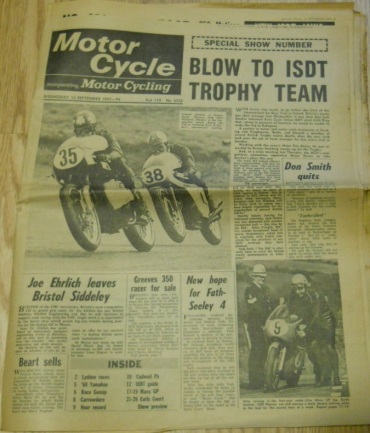 Sadly the image of the page is a poorer quality than the above listed one but reading the enlarged image, it tells the news in the week before the ISDT 1967 starting in Poland that the British Team manager Jack Stocker, a seasoned ISDT campaigner himself had to inform the ACU’s Cliff King that he would be unable to attend that years ISDT due to business commitments, a Major Eric Davies? was appointed at the last minute to replace him.

Also in the article appears to be details of the possible coverage of the event in Poland by the BBC and makes reference to the BBC TV’s Outside Broadcast Head of Sports Programming, Bryan Cowgill, (mastermind of Grandstand, Match of the Day Sports Night and coined the phrase Action Replay) who was seeking to secure a deal with the Polish Broadcasters to purchase coverage of the ISDT.