One of the great joys of helping rebuild this site has been the quest for making new material and the recovering of lost treasures as this event’s story is one of a history drawing to an end when the name was changed in 1980 all the sport has continued in a modified form. Of the two most popular topics visitors appear to come to Speedtracktales for are the stories of the ISDT 1964 in East Germany undoubtedly because of its connection with Steve McQueen and the ISDT 1939 in Austria & Germany owing to its rapid termination for the British team which abandoned to evacuate Germany and Europe days before the outbreak of the Second World War. It is however often said that the abandonment was as much a reaction, or over-reaction, to the events that overtook riders following the abandonment of the ISDT 1914 which took place at the time of the declaration of the First World War.

With the anniversary of the declaration of the war looming I was determined to write a feature on the event of 1914 and any ISDT riders connected with the first world war but information on an event, that was never held, is very scarce as there were no reports. Then last week out of nowhere, as ever is the case, came an email from the grandson and great-grandson of Maurice Greenwood who was an active ISDT rider and follower from 1913 and through most of his life. The family were keen to learn about the ISDT and in return offered me access to their family collection of materials connected to the ISDT. As the first of these rolled in it includes a preview of the 1914 event and an article from a paper about the incidents related to Maurice’s passport-less dash to get back to ‘Blighty’ before the war commenced. There is considerable material available in this collection and this is just the first of a number of features that I will be making to hi-light what we are able to rediscover of the event from Maurice’s diligent collecting and retention of material and the family who clearly cherish his memory. 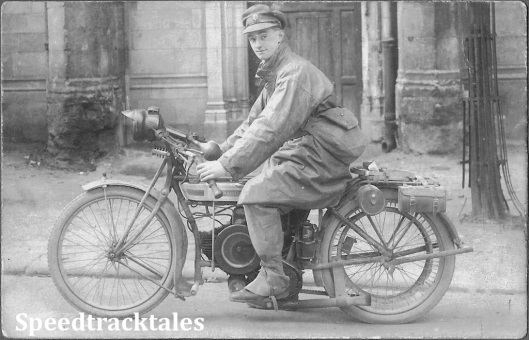 •the Article below first appeared in ‘the Motor Cycle’ Aug 1914

Mr.W. Maurice Greenwood (son of Mr. Titus Greenwood, Lydgate) who as stated in our last issue experienced great difficulty in returning home from France, contributes the following interesting article to “the Motor Cycle”

” After the abandonment of the F.I.C.M. Six Days Trials, the British Consul at Grenoble had advised us to get out of the country as quickly as possible, and things to us began to look rather serious. There were four in the party – myself with a Connaught, W. B. Little with a Premier, and R. A. Bishop with a Royal Enfield sidecar and passenger. Our tanks were all nearly empty, but we put our trust in good luck, and started off at 11 a.m. on our journey to the North Coast. The streets in Grenoble were rather quiet, for a lot of the troops had gone away by train i n the early morning. Our luck was in all right, for we came across a small garage in a village two miles out of Grenoble where we obtained enough “essence” to fill all the tanks. This eased our minds a little , and we accelerated speed up to forty and forty- five miles; one speedometer jammed at fifty – eight, so we were “travelling some.” We kept on at this rate till we reached a small place named Bourgoin, where we had lunch. I rather think we might have got into trouble at this place, for a French soldier ordered us to garage our machines in a shed and not to take them out again, but as he had disappeared when we came out of the hotel, our machines disappeared also, as fast as we could make them, on the road to Lyons. It was I nearly 4 p.m. when we neared Lyons, keeping well together all the way. It took us some littIe time to find the way through the town, but we were soon on the road to Roanne. 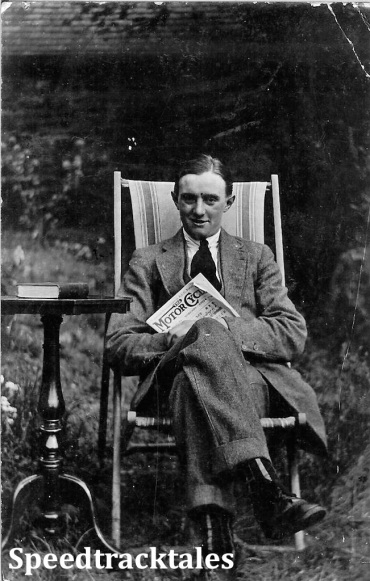 ” My oId two-stroke was running splendidly, and I kept well ahead, for the road was fairly good though twisty, and well fitted up with guide posts. On reaching the octroi at Roanne, about 6·30 p.m., I pulled up to wait for the other two, but as they had not appeared in sight after twenty minutes waiting,I jumped on the machine and rode back to see what was wrong. I found them about twelve miles back at a village called l’Arbresle; the Enfield had developed bearing trouble in the back wheel, and it was impossible to repair it. We tried our best with the tools we had till 10 p.m., and then gave it up. The villagers crowded round us and gave us moral support, which was not worth much, but better than having bricks thrown at us. We stayed the night in l’Arbresle, and in the morning, after a council of war , we left the Enfield at the hotel, and then went back to Lyons to see if we could obtain a spare ball race for the back wheel. Bishop, and his luggage rode on my carrier, and Little took the passenger and his luggage.

“We reached Lyons safely and went to the Motosacoche depot, but found out that we could not get a spare in the whole town. We were in a fix all right. So off we went to see the Consul, for things began to look a wee bit serious, and not one of us had a passport. When we got to the Consul’s office there were about sixty waiting their turn to see him. Two girls fainted in the crush while we were there. However, we got certificates of registration after waiting eight hours and went outside again.

” We had barely got into the street again when three soldiers came up and informed us that they required our machines to be left with them as they would be required for national service. This put us in a worse plight than before, but there was no help for it, according to the Consul, so we obtained receipts for the two machines. and left the receipts in the care of the overworked Consul.

Photo – Maurice Greenwood in Rouen, possibly 1916 with a Clyro Sidecar for Machine Gun [WDR77] (Courtesy of the Greenwood Family Collection)

” It was hardly a nice situation for us; stranded in a foreign country in a state of war. If they had left us our machines, we should not have felt so helpless, but there we were and we had to make the best of it. We asked the Consul’s advice, and he promised to get us on a troop train which was leaving for Paris at noon the following day, Tuesday. He fulfilled his promise, and Tuesday, 12-30, saw us steaming out of Lyons in a crowded troop train at the headlong speed of ten miles per hour towards Paris. ‘We did not worry about the speed as long as we got there. It was 2-30 p.m. on Wednesday when we arrived at Paris.

The first thing was a good English breakfast and then home

” We had to find the Consul in Paris and see what he could do for us, and after a weary and anxious wait of eleven hours, we boarded the train for Havre, and arrived at that port at 9-30 a.m. on Thursday. The boat left Havre at 11 p.m. the same day, and, after a very crowded crossing with all lights out, We arrived. at Southampton about 8 a.m. Friday gIad to get back to Old England. The first thing was a good English breakfast and then home”

Born in 1893, Maurice competed in then followed the ISDT event right into his retirement travelling out by caravan to Europe to watch it making holiday trips in caravans to France right into his late 80’s and living until the ripe old age of 96. But not only do we have the luck of the records he kept but the Imperial War Museum took time to undertake a complete set of audio interviews with him which are now available to be listened to his recollections of not just the war but also the ISDT online.

The recordings of the interview can be listened to here. The recordings are used on the basis of the rights being owned by the Imperial War Museum and are shared here on the basis of the IWM non commercial use license. Please note also that these audio files are in Adobe Flash .swf format and therefore some mobile devices such as those running iOS – iPad, iPhone is unable to play the file.

This is the index of topics covered

•REEL 6 Continues: story of being given petrol by Austrian civilian; status as enemy alien; crossing border into Switzerland; story of hearing Hitler broadcast on radio; move to Lucerne; journey back via France and Belgium; question of treatment by German and Austrian civilians; failure to use note guaranteeing safe transport.

Unfortunately the above file appears to be damaged and only plays partial snippets of the interview, this has been reported to the IWM hoping they can source a new digital copy from the original audio source. UPDATE IWM have now checked the material and confirm the online copy is corrupted, however, the master is still fine and they have provided me with an mp3 file until they are able to update the online copy. Due to IPR issues I am unable to provide copies but can help any one with an enquiry about content.

Speedtracktales is endebted to the generosity of the Greenwood family in making this and other material available. In particular the help of his Grandson Martin and Great Grandson Max. Please be aware any reuse of this material for commercial purposes without consent exceeds the rights retained by ourselves and the respective owners and will require a request for approval of use.

2 thoughts on “ISDT 1914: Maurice Greenwood and the ‘Great Escape’ Prequel…”